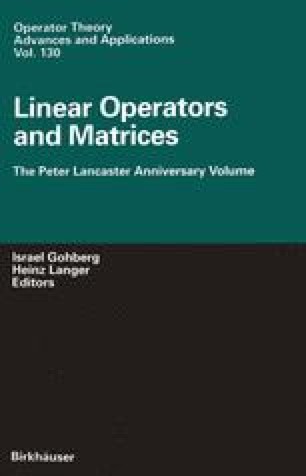 Peter Lancaster, my Friend and Co-author

The first time I heard about the mathematician Peter Lancaster was from Heinz Langer. In 1967-68 Heinz spent a year in Toronto University at the invitation of Professor Israel Halperin. During his visit to Canada he was also invited by Peter Lancaster to spend a short period in Calgary. After his return Heinz told us about the work of Peter, about his book on vibrations of systems and about his personality. He also brought the book to Odessa and Peter’s results were often quoted in the seminars and discussions, and very soon Peter became popular in Odessa.

Invariant Subspace Rocky Mountain Matrix Polynomial English Heritage Block Toeplitz Matrice
These keywords were added by machine and not by the authors. This process is experimental and the keywords may be updated as the learning algorithm improves.
This is a preview of subscription content, log in to check access.