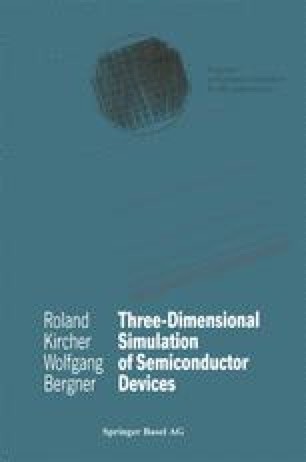 This chapter presents the important transport mechanisms in the semiconducting material, and a detailed discussion of the physical models, which describe the transport phenomena. We will restrict ourselves on the classical description of the transport by the so-called drift-diffusion approximation. This has been successfully applied to the modeling of many device structures for more than one decade. From the present point of view, the classical approach will be the state-of-the-art formalism in three-dimensional device simulation for at least the next decade. Other, more sophisticated approaches for the device modeling, like ballistic transport description or the hydrodynamic model, which give a deeper insight into the device physics, have first to be evaluated in two-dimensional devices, because of their tremendous requirements of computer resources. On the other hand, the goals of two- and three-dimensional modeling are different. The state-of-the-art modeling in two dimensions is concerned mainly with describing the phenomena in the deep sub-micron regime of MOSFETs, whereas the objectives in three dimensions are the influence of the geometry of the device boundaries on the device characteristics. The latter ones can be described with the “classical” transport models. Nevertheless, we will briefly discuss the limits of the classical description.