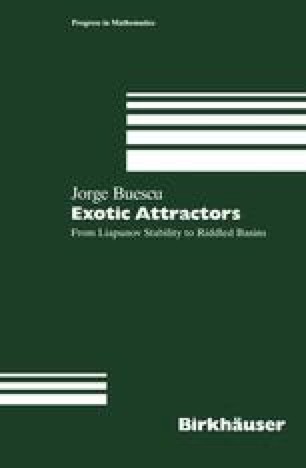 In Chapter 1 we discussed several notions of stability for compact invariant sets of dynamical systems. Here we shall prove that, under very general hypotheses, the set of connected components of a stable set of a discrete dynamical system possesses a tightly constrained structure. More precisely, suppose that X is a locally compact, locally connected metric space, f: X → X is a continuous mapping (not necessarily invertible) and A is a compact transitive set. Let $\overset{\lower0.5em\hbox{$\smash{\scriptscriptstyle\smile}$}}{f}$ K be the set of connected components of A and let : K → K be the map induced by f We proved in § 1.3 that either K is finite or a Cantor set; in either case f acts transitively on K. Our main result (Theorem 2.3.1 below) is that, if A is Liapunov stable and has infinitely many connected components, then $\overset{\lower0.5em\hbox{$\smash{\scriptscriptstyle\smile}$}}{f}$ acts on K as a ‘generalized adding machine’, which we describe in a moment. We remark that imposing the stronger condition of asymptotic stability destroys the Cantor structure altogether and K must be finite — which is the content of Theorem 1.4.6. Thus adding machines can be Liapunov stable but never asymptotically stable. This Theorem may be strengthened to a version that does not require transitivity but the weaker property of being a stable ω-limit set.

Periodic Orbit Periodic Point Inverse Limit Symbolic Dynamic Topological Conjugacy
These keywords were added by machine and not by the authors. This process is experimental and the keywords may be updated as the learning algorithm improves.
This is a preview of subscription content, log in to check access.