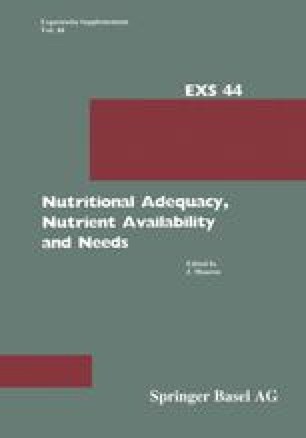 Thermogenic Responses Induced by Nutrients in Man: Their Importance in Energy Balance Regulation

It has recently been shown that DIT consists of two separate components which can be described as “obligatory” and “regulatory” thermogenesis. The former is due to the energy costs of digesting, absorbing and converting the nutrients to their respective storage forms. The latter is an energy dissipative mechanism, mainly studied in animals. There is good experimental evidence showing that brown adipose tissue (BAT) is involved in the adaptive thermogenesis observed in rats fed a varied and palatable “cafeteria” diet. In addition, a thermogenic defect in BAT has been demonstrated in adult as well as young genetically obese animals, and this defect is present not only in adult, but also in young (12 day old) ob/ob mice, i.e. before the development of obesity. Thus, a defective thermogenesis seems to be a cause, rather than a consequence, of obesity in these animals.

In man, the role of thermogenesis in energy balance regulation is not yet understood. Some conflicting results may have arisen from inadequate techniques to measure energy expenditure. In our laboratory, we have developed three different techniques to measure energy expenditure in man, namely direct calorimetry, indirect calorimetry using an open-circuit ventilated hood system, and a respiratory chamber. Data from recent studies on DIT in man support the concept that a defect in thermogenesis may contribute to energy imbalance and weight gain in obese individuals.

We have been undertaking studies in obese subjects in an attempt to assess whether insulin resistance, which frequently occurs in obesity, affects glucose-induced thermogenesis (GIT). In 55 obese individuals studied over 3 hours following a 100 g oral glucose load, GIT was significantly reduced when compared to that of a control group. It is noteworthy that the magnitude of the reduction in GIT was related to the degree of insulin resistance; the more insulin-resistant patients had the lowest GIT. The measured value of GIT in these insulin-resistant patients corresponded well with the “obligatory” thermogenesis of glucose. By contrast, control subjects exhibited a thermogenic response twice as great, suggesting both “obligatory” and “regulatory” components in their GIT. These results suggest that insulin may be required for the full DIT response, and that insulin resistance contributes to blunt the “regulatory” thermogenesis. In this study we have shown that age also contributes to a decrease in GIT. Thus both insulin resistance and age are factors which decrease the thermogenic response to glucose. These thermogenic defects may account, at least partially, for the increasing occurrence of obesity with age, since they favour energy retention and weight gain.

It is not yet established whether the thermogenic responses due to lipid and protein ingestion are solely accounted for by their respective “obligatory” thermogenesis. Studies on protein turnover rates are needed in man to establish whether adaptive modulations of synthesis and breakdown of protein contribute to a variable thermogenesis.

Finally, it is noteworthy that in rats and mice, there are many common features between DIT and NST including increases in metabolic rate, in thermogenic response to noradrenaline and BAT hypertrophy and hyperplasia. Moreover, these features are all defective in genetically obese mice. In human obese female individuals, we have also shown evidence for a deficiency in both DIT and NST. Further studies are needed to establish whether a defective thermogenesis may precede the development of obesity in man, or whether it is a consequence of the increased body fat mass. Our data showing the progressive decline in GIT with increasing insulin resistance in the obese may favour the latter alternative; however, more work is needed to study the obese after weight loss with the possibility of detecting a defective thermogenesis, independent of the weight excess, and which may be genetically determined.

Brown Adipose Tissue Cold Exposure Plasma Noradrenaline Level Energy Dissipative Mechanism Cafeteria Diet
These keywords were added by machine and not by the authors. This process is experimental and the keywords may be updated as the learning algorithm improves.
This is a preview of subscription content, log in to check access.