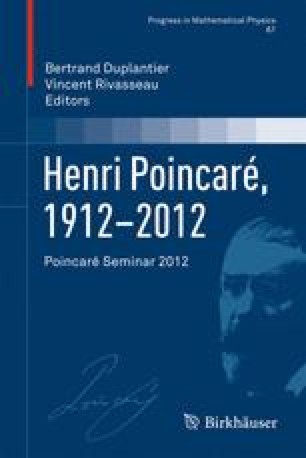 Light is a recurrent theme in Henri Poincaré’s mathematical physics. He scrutinized and compared various mechanical and electromagnetic theories of the optical ether. He gave an important boost to the mathematical theory of diffraction. He analyzed the difficulties encountered in applying Lorentz’s electromagnetic theory to optical phenomena. He emphasized the metrological function of light in the nascent theory of relativity. Amidst these optical concerns, he derived his philosophy of rapports vrais, hypotheses, conventions, and principles, which in turn oriented the critical enterprise through which he pioneered relativity theory.

Lorentz Transformation Ether Theory Electromagnetic Theory Optical Phenomenon Relativity Principle
These keywords were added by machine and not by the authors. This process is experimental and the keywords may be updated as the learning algorithm improves.
This is a preview of subscription content, log in to check access.