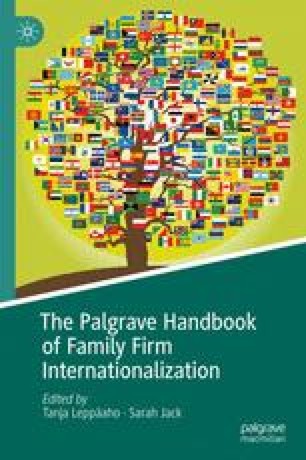 Attempts to explain the distinctive nature of family firms (FFs), including how noneconomic goals may dominate FFs’ strategic decision-making, are reflecting attention to the socioemotional wealth (SEW) perspective. Although FF research has discussed internationalisation as a strategic decision, we lack evidence on how FFs balance the economic and noneconomic (i.e. SEW) goals in their internationalisation. Specifically, since SEW manifests itself in relationships, and internationalisation requires relationship-building with partners—especially for small firms with limited resources—this study aims to explore whether SEW preservation restrains small FFs from building foreign partner relationships (FPRs) for internationalisation. To provide answers to the question, the author undertook a multiple-case study of eight small Finnish FFs. The findings suggest that firms with higher levels of SEW were more active in building close FPRs. Thus, SEW preservation can extend to the international context, with foreign partners included in the ‘scope of SEW preservation’, as part of an extended international family. However, utilising attributes of different SEW dimensions requires concurrent awareness and implementation of economic goals. As a result, economic and noneconomic (SEW) goals coexist and interact in the internationalisation of small FFs. The paper concludes by presenting implications and propositions for future research.

High SEW—Example Firm A. In Firm A, the CEO (second generation) and her father (founder and chairman of the board) had strong identification with and emotional attachment to the firm. For instance, the business had been part of the CEO’s everyday life since childhood. They saw continuation of the business from one generation to the next as important. For them, the FF was the embodiment of the people owning it and working for it. There appeared to be good relationships and cooperation between family and nonfamily members. Although the family brought good values to the business, they saw that it is important to keep family matters separate from the business, so that strategic decisions were not biased. However, since family members had full ownership of the firm, their views strongly entered into the firm’s decision-making. This resulted in risk-averse decisions, since the family’s own money, and thereby the well-being of the family (also all the employees) was in question. However, since the firm was highly growth-oriented and willing to accelerate internationalisation, family benefit per se was not a priority. The export sales representative, a nonfamily employee, indicated that he had been strongly engaged in the business from an early period, and he believed that other employees felt the same. According to him, the feeling was like being part of the family.

Moderate SEW—Example Firm C. Firm C did not strongly represent itself as an FF. Although the CEO (first generation) had strong commitment to the business, and although the firm was fully owned by the family, the firm was, first and foremost, a limited company, set up as a legal entity. Thus, ownership was in principle separated from the family, and the priority was whatever would benefit the firm. The analysis indicated that if there was too much emotional attachment involved, family quarrels could occur. However, there was united power within family members in running the business. Continuing the business from generation to generation was valued, but in the end, it was the interests of the firm that mattered. Despite this, the CEO said that he saw family ownership as best for the firm in the long term. Relationships within the family and with nonfamily members were good: family members were not privileged and were just like any other employees in the firm. The CEO said that he aimed to be the best employee himself. The daughter of the CEO, the Executive Vice President, had fairly strong emotional attachment to and identification with the firm, as she had grown into her position, and had taken on increasing responsibilities over time. There was probably a special passion to work and to contribute, since Firm C was an FF. Nevertheless, the FF status was not excessively emphasised, even if it was a source of pride. More important than being family-centred was the fact that the firm employed so many excellent people, with whom the firm could progress.

Low SEW—Example Firm E. In Firm E, continuing the business from generation to generation was not an end in itself. The business had been transferred from an authoritarian father to his son (the CEO interviewed) as something obligatory; thus, the CEO did not want to pass the business on to the next generation in the same way. There had been emotional attachment previously, but it had diminished, due to challenges in the industry and to the outsourcing of many activities. However, since the FF was felt to be a kind of an embodiment of the persons involved, there was pride and honour to some extent. This had impelled the CEO to manage through severe financial difficulties. The relationships with nonfamily employees had generally been long-term. However, among family members (as distinct from Firms A, B, and C) the relationships were somewhat difficult. The CEO had been the main person to run the business, as the other family members had been somewhat reluctant to participate, and conflicts had occurred.