Uncertainty for Safe Utilization of Machine Learning in Medical Imaging, and Graphs in Biomedical Image Analysis 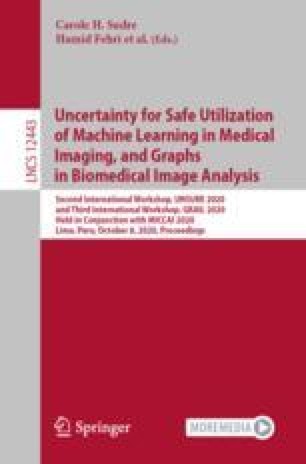 Uncertainty quantification in inverse medical imaging tasks with deep learning has received little attention. However, deep models trained on large data sets tend to hallucinate and create artifacts in the reconstructed output that are not anatomically present. We use a randomly initialized convolutional network as parameterization of the reconstructed image and perform gradient descent to match the observation, which is known as deep image prior. In this case, the reconstruction does not suffer from hallucinations as no prior training is performed. We extend this to a Bayesian approach with Monte Carlo dropout to quantify both aleatoric and epistemic uncertainty. The presented method is evaluated on the task of denoising different medical imaging modalities. The experimental results show that our approach yields well-calibrated uncertainty. That is, the predictive uncertainty correlates with the predictive error. This allows for reliable uncertainty estimates and can tackle the problem of hallucinations and artifacts in inverse medical imaging tasks.

A.3 SGLD with Step Size Decay

Here, we provide justification why downsampling of an image by averaging neighboring pixels reduces the noise level and can be used as an approximation to a ground truth noise-free image (by sacrificing image resolution).

Downsampling of an image reduces the observation noise.

We approximate the Poisson noise to simulate a low-dose X-ray image with a Normal distribution. It is well-known that the limiting distribution of \( \mathsf {Poisson}(\lambda ) \) is Normal as \( \lambda \rightarrow \infty \) [10]. For completeness, we list a common proof using the moment generating function of a standardized Poisson random variable:

The Poisson(\(\lambda \)) distribution can be approximated with a Normal distribution as \( \lambda \rightarrow \infty \).