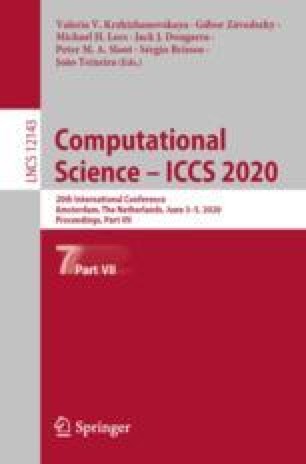 The enhanced oil recovery by injection of gas is a technique that is used since the 1930’s [14]. The sweep efficiency of gas, however, can be affected by gravity (by the gravity override phenomenon, that occurs when the injected gas accumulates in the upper layers of the reservoir) and by the development of preferential paths (viscous fingering), due to gas lower density and viscosity. These obstacles can be surpassed by the creation of foam, that can be defined as the agglomeration of gas bubbles separated by thin liquid films (lamellae), since foam apparent viscosity is much higher than the viscosity of gas [11, 12, 23]. The usage of foam in oil recovery is mainly motivated by the reduction of the gas phase mobility [15].

The numerical approach for solving this system of PDEs should be capable of handling several complexities due to discontinuity, non-linearity, stiffness, natural instabilities, among others. The numerical methods should also preserve important properties, such as local conservation of mass, shock capture, non-oscillatory solutions, accurate approximations, and reduced numerical diffusion effects.

To the extent of our knowledge, this problem is usually solved using explicit-in-time finite difference schemes [1, 16, 21, 25]. Also, the use of commercial software is prevalent in the literature [7, 20, and references within]. The most common approach in commercial software is to represent the effect of foam by a factor that reduces the mobility of the gas phase; therefore, bubble creation and destruction are not represented explicitly [9, 21].

An effective numerical scheme to solve this kind of model and to address its inherent complexities is based on rewriting the problem in terms of global pressure, as in [4]. In this scheme, one has two distinct coupled problems: an elliptic problem and a degenerate hyperbolic problem. The next step is to decouple the system of PDEs into two subsystems of equations, each one of a different nature. In doing so, each subsystem can be solved by specialized methods, such as finite element and finite volume methods, according to their mathematical properties and the relation between precision and computational efficiency required in the resolution of each step. In this sense, for the spatial discretization of the hyperbolic problems we can employ the finite volume method, for instance; for time discretization, a common choice is a finite difference method, while a hybrid finite element method can be applied to the elliptic equations.

In this context, we develop a staggered algorithm to decouple the hydrodynamics from the hyperbolic system, resulting in a scheme that uses a locally conservative hybrid mixed finite element method to approximate the velocity and pressure fields and a high-order finite volume scheme to solve the hyperbolic equations. The two problems are solved in different time scales. Thus, the proposed staggered algorithm is employed to simulate two-phase (water and gas) flow in a heterogeneous porous medium. We compare pure gas-water injection with the gas-water-foam flow. The results show a reduction of gravity override and viscous fingering effects when the foam is present.

This work is organized as follows: in Sect. 2, we define a fractional flow formulation for Eqs. (4)–(6) using the concept of global pressure; in Sect. 3, we present an algorithm to solve the problem using a hybrid mixed finite element method for the elliptic problem and a high-order finite volume method methodology to solve the hyperbolic equations; numerical results are shown in Sect. 4. Finally, in Sect. 5, we present some concluding remarks.

In this section, we introduce the sequential algorithm that combines two kinds of numerical methods to solve (9)–(11).

The hydrodynamics (9)–(10) is approximated using a naturally stable mixed finite element method introduced in [22]. This method is locally conservative, relying on the strong imposition of the continuity of normal fluxes and on a discontinuous pressure field. The combination of a hybrid formulation with a static condensation technique reduces the number of degrees of freedom in the global problem.

The transport system (11) is solved using the KNP method, a conservative, high-order, central-upwind finite volume scheme introduced in [18] that shows reduced numerical diffusion effects. The KNP scheme is an extension of the KT method [19] that generalizes the numerical flux using more precise information about the local propagation velocities. At the same time, the KNP scheme has an upwind nature, since it respects the directions of wave propagation by measuring the one-sided local velocities. KNP is a semi-discrete method based on the REA (Reconstruct Evolve Average) algorithm of Godunov [8]. Furthermore, the KNP scheme allows for using small steps in time without requiring an excessive refinement of the spatial mesh, since the numerical diffusion does not depend on the time step. After discretization in space, the resulting system of ODEs is integrated in time using a BDF (Backward Differentiation Formula), an implicit, multi-step method that is especially indicated to solve stiff equations [5].

In the following sections we comment on the methods employed to solve each problem.

When a mixed finite element formulation is used to approximate the Darcy system (13), it is necessary to simultaneously fulfill the compatibility condition between spaces and to impose the continuity of the normal vector across interelement edges. In addition, the resulting linear system is indefinite, which can restrict the numerical solvers that could be applied. By using a hybrid formulation, the continuity requirement is imposed via Lagrange multipliers, defined on the interelement edges. Furthermore, if the local problems are solvable, it is possible to eliminate all degrees of freedom related to local problems using a static condensation technique, resulting in a considerable reduction of the computational cost, since the global system involves only the degrees of freedom of the Lagrange multiplier. Also, in this case, the global problem is positive-definite. Once the approximation for the Lagrange multipliers is found, the original degrees of freedom (associated with velocity and pressure) can be computed in local, independent problems.

From these definitions, we can write the following hybrid mixed formulation for the hydrodynamics problem (13):

To solve the hybrid formulation (18)–(19) we apply the static condensation technique that consists in a set of algebraic operations, done at the element level, to eliminate all degrees of freedom corresponding to the variables \({\varvec{u}}_h\) and \(p_h\), leading to a global system with the degrees of freedom associated with the multipliers only.

We can observe that static condensation causes a major reduction in the size of the global problem, which is now rewritten in terms of the multiplier only. Also, the new system of equations is positive-definite, allowing for using simpler and more robust solvers. In the end, a hybrid formulation associated with static condensation leads to a great reduction of the computational cost required to solve the global problem. In this work, the deal.II library [3] is used to solve this hydrodynamics problem.

The numerical methodology used to approximate the water saturation and bubble texture Eqs. (14) and (15) is a high-order non-oscillatory central-upwind finite volume method proposed in [18] and here referred to as KNP. Like many other finite volume methods, the KNP scheme is based on a grid of control volumes (or cells).

Various numerical methods can be used to solve the system of ODEs (21). In this work, a variable order, adaptive step Backward Differentiation Formula (BDF) was chosen. This stable, implicit scheme allows for taking larger time steps than an explicit method would require, which reduces computational cost. In our numerical simulations we used the implementation of the BDF scheme from the CVode package, available in the SUNDIALS library [10].

The water saturation profiles for case A at \(t = 2\,000\) s and \(t=10\,000\) s are shown in Figs. 2 and 3, respectively. The gravity effects are much more pronounced in the no-foam simulation. Also, as expected, the water phase displacement occurs more slowly in the foam presence due to the gas mobility reduction caused by foam. Note that, without foam, the gas breakthrough has already taken place at \(t = 10\,000\) s (Fig. 3), which does not occur when foam is present. Moreover, for the foam model adopted [2], viscous fingering and gravity override are reduced with foam as time advances. As a result, a better sweep efficiency of the medium is observed when foam is present, as can be seen in Fig. 6(a). In our experiments, foam injection increased total water recovery by approximately \(100\%\).
In case B, the permeability field has a more evident preferential channel in the lower region (see Fig. 1(b)). The results for this channelized porous formation (Figs. 4 and 5) reinforce the foam’s ability to reduce the effects of gravity override and viscous fingering, according to the model used, even though this case presents a more pronounced preferential path. The water cumulative production curves for case B (Fig. 6(b)) show that gravity effects on the production are much more pronounced when no foam is present; this is due to the influence of gravity on diverting the flow from the high permeability channel, resulting in higher sweeping efficiency. Moreover, foam injection in this case increases total water production by approximately \(50\%\), when gravity is considered, and by about \(100\%\) when gravity is neglected.

In this work, we presented a locally conservative numerical algorithm to solve the gas-water flow including foam injection. The system of PDEs that models this phenomenon was derived considering a fractional flow formulation based on the global pressure. The numerical staggered approach proposed combines a high-order central upwind finite volume method for the hyperbolic equations adopting BDF time integrations with a hybrid finite element method to solve the Darcy’s problem employing Raviart-Thomas spaces.