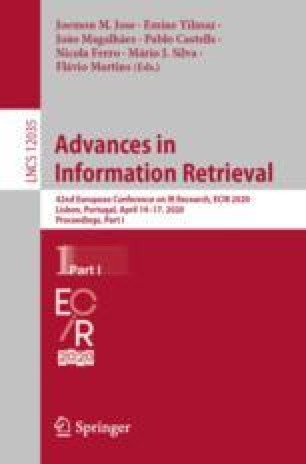 Privacy concerns can prohibit research access to large-scale commercial query logs. Here we focus on generation of a synthetic log from a publicly available dataset, suitable for evaluation of query auto completion (QAC) systems. The synthetic log contains plausible string sequences reflecting how users enter their queries in a QAC interface. Properties that would influence experimental outcomes are compared between a synthetic log and a real QAC log through a set of side-by-side experiments, and confirm the applicability of the generated log for benchmarking the performance of QAC methods.

Query auto completion (QAC) systems offer a list of completions while users enter queries in a search interface. Users can either submit one of the completions as their query, or advance their partial query by selecting a completion and then continuing to type [33]. A detailed QAC log capturing the sequence of partial queries, along with the completions presented and the user interactions with them, is required in order to evaluate a QAC system [37, 38]. However, concerns about the privacy of query logs and regulatory requirements such as GDPR mean that there is a need for alternative ways of obtaining logs for academic purposes.

Here we explore a framework for generating synthetic QAC logs, extending the work of Krishnan et al. [33], who suggest converting a QAC log to an abstracted format (an abstract QAC log) that records only the length of each partial query and the lengths of words used, minimizing privacy concerns but removing the possibility of performing evaluations on actual strings. Synthetic QAC log generation seeks to produce a list of plausible synthetic partial query sequences by mapping the word lengths from the abstract QAC log to strings from a publicly available dataset. An example of the proposed process is shown in Fig. 1. On the left are partial queries typed by a user. The abstracting process converts these to the digit sequences shown in the middle column, describing the strings but not their characters; and then the corresponding synthesized strings are shown at the right. Note that it is neither necessary nor sufficient for the synthetic log to contain semantically valid phrases. Comparison between the original and synthetic logs across a range of properties show that the synthetic log can be used to evaluate QAC system performance. Moreover, the synthetic log eliminates the privacy concerns associated with the original.

A QAC system retrieves a candidate set matching the partial query \({\small \mathsf{{P}}}\), drawing from a target string collection, with strings in the target collection having an associated score. Query Auto Completion systems typically match \({\small \mathsf{{P}}}\) against past queries from a log; or, in the absence of logs, they can also be synthesized [14, 40]. Methods of ranking the candidates include static popularity [9], search context [9, 29], forecast popularity [15], personalized ranking parameters [15, 29, 42], and diversity [16]. It is also possible to choose an initial candidate set based on popularity and then apply a second ranking criteria to obtain the final strings [15, 16]. QAC implementation strategies vary based on how the partial query \({\small \mathsf{{P}}}\) is matched against the target strings [32]. A common approach is to use a trie [3, 4, 25, 27] to retrieve candidates that have \({\small \mathsf{{P}}}\) as a prefix; or inverted index-based approaches [10, 11, 23] that offer completions independent of the ordering of the words in the partial query. The functionality of a QAC system can be extended beyond character level matches by including contextual cues [11] or synonyms [12, 28]. Error-tolerant QAC approaches [17, 28, 36, 47] allow up to a fixed number of character mismatches to account for possible typing errors.

User interactions are a key factor in implementation and evaluation of QAC systems [26, 33, 38] and have been captured using a wide range of models [31, 32, 33, 37, 38, 43, 44]. In particular, users are not limited to entering single characters, and can alter the partial query by selecting a completion or deleting characters already entered. Until now, the test collections used to evaluate traditional search systems have been anonymized commercial logs [1, 19, 34, 48] or synthesized logs [5, 30, 45, 49]. QAC system evaluations have typically been performed over large publicly available string collections [10, 14, 23], with strings taken sequentially from left-to-right to generate partial query sequences [10]. However this approach does not account for the full range of possible interactions [32, 33]. In this work, we explore an approach to generation of synthetic partial query sequences that addresses this gap.

Handling Deletions. To include deletions, we assume that something different was initially typed (the replacement word) and was converted to the word from the target string after the deletions. In particular, suppose that the current conversation contains the deletion of a word \({{{\small \mathsf{{w}}}}_{k}}\) starting from the ith interaction and ending with the jth interaction. Then, for every interaction preceding the jth interaction, \({{{\small \mathsf{{w}}}}_{k}}\) is substituted by a replacement word constructed via a set of deletion heuristics. If character sequences are deleted and re-entered several times during the conversation, several replacement words will be required. The last replacement word should be close to the original word, and the penultimate replacement prior to it should similarly be a modification of the last replacement word. Table 1 gives an example of the partial query sequence generated by re-writing target strings when the conversation contains multiple deletions.
Table 1.

Users delete characters either due to typing errors [6, 20] made within that word, or to switch to an entirely different word. Among various typing errors that can occur in any character level entry systems [22], the following error categories that are predominantly discussed in past research [6, 20, 21, 46] are included in the generation process.

In a QAC interface, typing errors may not be the only reason why users delete characters. Sometimes users replace certain parts of a well-formed partial query, for instance to get a different set of completions. In such cases, referred as multichar deletions, the corrected word will differ from the original word in two or more character positions. To allow for such cases, the deleted part of the word is replaced with another string starting with the word’s remaining prefix, but differing in the next character. For example, consider the word “hawk” in Table 1. A deletion chain removed all of the characters except the “h”; and hence (working backwards), “hawk” was replaced by an alternate word that starts with “h” but not “ha”, such as “hole”.

The strings are converted to target strings by aligning the word lengths with the \({\small \mathsf{{seedsig}}}\). A target string can be generated from multiple originals. If, say, \({\small \mathsf{{seedsig}}}\) is \(\langle {9,4}\rangle \), then “wikipedia main page” gives the target string “wikipedia page” using MbD; and another string “personal web page wikipedia” gives the same target using BoN mode. If the same target string is produced by more than one string from the surrogate log, then the one with lower score is discarded.

A QAC log was formed by randomly sampling the logs from Bing2 QAC system over a period of one week from 13 August 2018. This Bing-QAC-2018 records the partial queries entered by the users and a unique \({\small \mathsf{{cid}}}\) for each conversation. The abstracted version of Bing-QAC-2018, referred to as Bing-Abs-QAC-2018, is generated by recording the signature and total length of each partial query along with a unique \({\small \mathsf{{cid}}}\) for each conversation. Note that Wiki-Synth was generated from Bing-Abs-QAC-2018 only (with no use of Bing-QAC-2018), and that the subsequent comparisons between Wiki-Synth and Bing-QAC-2018 were performed on secure Microsoft servers and in accordance with Microsoft privacy requirements.

Language Model for Finding Replacement Words. For deletion types other than multichar, the replacement word will be a modification of the original word based on the error category. For multichar deletions, the heuristics discussed above are used to find replacement words. The best replacement word based on contextual information among the candidate words that passes the heuristics is selected using a 4-gram language model (LM) trained on the title strings from Wiki-Clickstream. The language model is generated using KenLM [24],4 which is based on modified Kneser-Ney smoothing and provides fast model construction and querying. For example, an LM-based replacement for the target string “live queen”, is “live together” while a random replacement gives “live teufelshorner”; for the target string “web server”, a random replacement yields “web castelvetere” and an LM-based replacement gives “web content”. A similar character bigram model trained on the Microsoft spelling-correction dataset5 is used to find the most likely next mistyped character, given the previous character, to simulate substitution errors.

Comparison of Synthetic QAC Logs with QAC Logs. A synthetic QAC log should have some properties similar to the QAC log, and these can be used to validate the generation process. A comparison of these properties is given in Table 2. Other properties are desirable if a synthetic QAC log is to be a substitute in experiments for a QAC log. While comparing these properties, the partial queries from both the logs are treated as the test queries that will be queried against a collection of strings acting as the test collection. Extending our assumption that a user’s goal was to enter \({{\small \mathsf{{FinalP}}}}\), we claim that these strings could get eventually indexed by the QAC system and subsequently be queried. Thus, in our experiments, the list of \({{\small \mathsf{{FinalP}}}}\) strings are considered as a representative sample of a larger hypothetical test collection.
Table 2.

Goodness of power law fit against other distributions.

Frequency of Partial Query Strings. The likelihood of a query being repeated over time as a result of the power-law distribution affects the performance of various query processing strategies [13, 35]. The frequency distributions of partial queries and final queries from Wiki-Synth and Bing-QAC-2018 are given in Fig. 4 (left) with dashed lines showing the power-law fits for the corresponding distributions. The distributions give similar exponents except for the distribution of \({{\small \mathsf{{FinalP}}}}\) from Wiki-Synth, which has \(\alpha = {3.02}\), indicating a steeper decay in the probability of higher frequency partial query strings. The goodness of power-law fit against exponential and log-normal fits is compared using likelihood ratio R [2, 18] along with the significance level p, as reported in Table 3. Except for the frequency distribution of \({{\small \mathsf{{FinalP}}}}\) from Bing-QAC-2018, which is better explained with a log-normal distribution (\(R ={-2.42}, {0.04}\)), the other three distributions suit a power-law distribution, perhaps as a result of the sampling process followed. For some datasets, it is not surprising to get a better log-normal fit [18]. 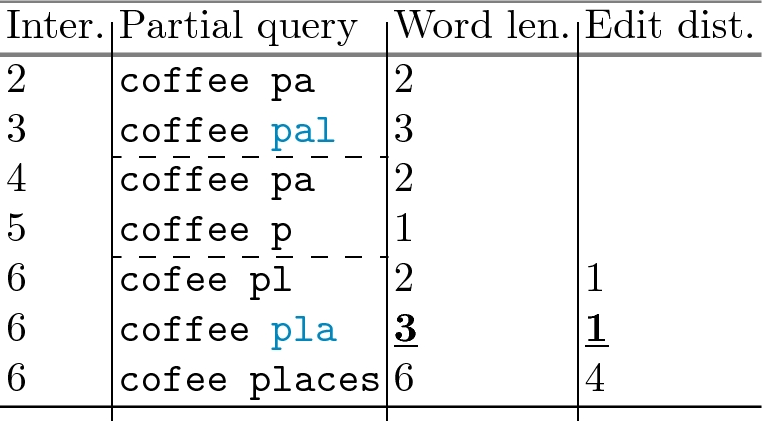 We have explored a method for generating a synthetic QAC log from an abstract QAC log, by mapping the word lengths of the abstract QAC log to those of a publicly available string collection, and applying a range of corrective techniques. Synthetic QAC formation can also be posed as a language generation problem relying on various models of QAC systems [31, 33].

We have demonstrated that the synthetic log generated from a pre-existing string collection encompasses many of the properties found in the original QAC log from which the abstract QAC log was derived. In particular, an analysis of typing errors found in actual QAC logs is reported, along with a description of how they were introduced into the synthetic log. As a result, there is a close correspondence between the real QAC log and the synthetic QAC log across a range of properties, each of which might influence the computational cost of providing the completion strings. That is, experiments using the synthetic QAC log can be expected to provide close approximations to behaviors that would be observed on a real QAC log. A particular example is efficiency, which we plan to examine in future work, comparing the performance of a range of QAC implementations using both synthetic and real QAC logs.

This work was supported by the Microsoft Research Centre for Social Natural User Interfaces (SocialNUI) at The University of Melbourne. We are grateful to Peter Bailey (Microsoft Australia) for his support of that project, and for additionally facilitating the work that is reported here.