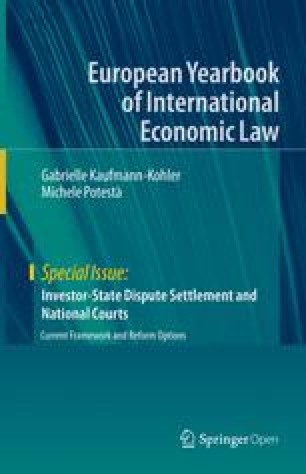 Scope and Objective of This Study

The objective of this study is to examine the multiple intersections between national and international courts in the field of investment protection, and to suggest possible modes for regulating jurisdictional interactions between domestic courts and international tribunals going forward. It seeks to contribute not only to the legal analysis, but also to the policy reflections that are necessarily linked to the ongoing initiatives for the reform of investor-State dispute settlement.

The authors of this study thank Anna Korshunova, CIDS researcher, for research assistance; Cara North and Christos Stamatis, CIDS researchers, for assistance in finalizing the footnotes; and Erika Hasler, Tabea Seedoch, and Mathew Yarden of the Library Team at Lévy Kaufmann-Kohler for continuous support in locating bibliographic resources. The study is current as of December 2019.

This study was commissioned by the Swiss Confederation’s State Secretariat for Economic Affairs (SECO) to the Geneva Center for International Dispute Settlement (CIDS). Its objective is to examine the interactions between national courts and international tribunals in the area of investment law. While most international investment agreements (IIAs)1 currently provide for investment arbitration as the forum for the resolution of disputes between foreign investors and host States, national courts2 also have jurisdiction over certain matters involving cross-border investments. This study seeks to map the relationship between national courts and international investment tribunals in the existing IIA context and examine the possible role of domestic courts in future treaty framework(s) which may emerge from the States’ current efforts to reform the system.

As a result of the growing criticisms over, and demands for reform of, investor-State arbitration by States, international organizations, and civil society, over the past years, States have embarked on a significant process of reflection on the existing investment treaty system and, in particular, the investor-State arbitral mechanism included in IIAs. In July 2017, the debate concerning investment arbitration reached another level when Member States of the United Nations Commission on International Trade Law (UNCITRAL), including Switzerland, entrusted Working Group III (WGIII) with a “broad mandate to work on the possible reform of investor-State dispute settlement”.3

As can be observed from the discussions that have taken place in WGIII so far, the criticism over investor-State arbitration has multiple facets and dimensions, which range from the perceived length and costs of investment arbitration proceedings, the structural inadequacy of ad hoc adjudicatory bodies to ensure consistency in the interpretation of legal issues, to the perceived lack of independence and impartiality of the adjudicators, among others.4 One of the more fundamental criticisms often voiced against investment arbitration, including in the political discourse, is that national courts are well placed to resolve investment disputes and there is thus no need for foreign investors to be provided with direct access to international tribunals for the settlement of such disputes. Other criticisms go to the possible scope of investment arbitration tribunals’ powers and the coordination of their actions with that of national courts. These criticisms raise questions that go to the very justification for current or future dispute settlement regimes. Answering these more fundamental questions may be helpful before the more specific concerns identified with the investment treaty regime are addressed in the ongoing reform efforts. A proper understanding of the role of domestic remedies may also be generally useful if and when States move to design new international dispute settlement frameworks, as the question of their interaction with domestic remedies is also likely to arise.

Against that background, this study seeks to carry out an in-depth review of the interactions between national courts and international mechanisms for the settlement of investment disputes, in the various forms in which they can be conceived, which includes not only investment arbitration but also standing adjudicatory bodies, such as an appeal mechanism (AM) and a multilateral investment court (MIC). By presenting a comprehensive overview of the many interactions between investor-State dispute settlement and national courts, while at the same time analyzing the possible role which domestic courts may play in the reform scenarios that States and regional organizations are currently considering, this study seeks to add value not only to the legal analysis, but also to the policy reflections that are necessarily linked to the ongoing reform initiatives. It is also meant to promote a better understanding of the multiple intersections that exist and are likely to continue to exist between national and international courts in the field of investment protection, and to suggest possible modes for regulating jurisdictional interactions going forward.

The study is organized as follows. After these introductory remarks, Chap.  2 reviews the existing criticism of investor-State dispute settlement in relation to the role of domestic courts (infra at  2.1). Understanding this criticism requires consideration of the historical, economic, and political reasons that underpin the creation of the current investment dispute settlement system (infra at  2.2) and assessing whether those reasons remain valid in today’s world (infra at  2.3). Chapter  3 examines the multiple and often complex ways in which the two systems—national judiciary and international tribunals—interact in the existing IIA framework. Chapter  4 then moves to the main reform scenarios which States are currently considering, with a view to analyzing the possible role which national courts could play if investment arbitration is (i) reformed through targeted adjustments, (ii) supplemented with an AM, (iii) replaced with a MIC, or (iv) supplanted by inter-State mechanisms. It will also take account of the scenario where investment arbitration is entirely eliminated without being replaced by an alternative international mechanism, which would result in a system where domestic proceedings operate as the sole forum for the settlement of investment disputes. Chapter  5 sets out the conclusions and recommendations in light of the analysis carried out in the previous sections.

The main points of intersection between domestic courts and international investment tribunals examined in this study touch on issues of jurisdiction, admissibility, merits, and procedure. The questions examined thus cut across almost the entirety of the law of investment protection in both its substantive and procedural aspects, and have given rise to difficulties in their application and often splits in the jurisprudence. Given the breadth of the issues, the study’s approach is to focus primarily on State practice as reflected in the conclusion of IIAs and the policy choices underlying the treaty texts. In so doing, it does not limit the examination to IIAs of certain countries or regions, but seeks to provide a global picture of the IIA practice worldwide to the extent relevant to the issue discussed.

This being said, the study devotes special attention to Swiss practice. Switzerland is a party to the ICSID Convention and has concluded over 110 BITs with its trade partners, making it one of the economies with the widest IIA network worldwide.5 Swiss BITs have been invoked in at least 20 known investor-State disputes by Swiss investors.6 Furthermore, Switzerland has been traditionally one of the most chosen seats for international arbitration, including (non-ICSID) investment arbitrations, due to, inter alia, the country’s reputation for neutrality and stability as well as the legislation’s and the judiciary’s pro-arbitration approach. In the last few years, there has been an increase in Swiss-seated investment treaty arbitrations, a trend which may well continue especially for intra-EU disputes as a result of the uncertainties arising from the judgment by the Court of Justice of the European Union (CJEU) in Achmea.7 An increase of Swiss-seated arbitrations means, in turn, a potentially greater involvement of the Swiss Federal Tribunal with investment matters.8

Before embarking on the analysis, a point of terminology is in order. The authors of this study are of the view that the term “ISDS” (which is the acronym for “investor-State dispute settlement” and which is often employed in the reform discussions) is imprecise and may have different meanings depending on the context in which it is used. In its colloquial and perhaps most widely used meaning, the term is essentially synonymous with the current investor-State international arbitration system.9 Yet, the a-technical formula “investor-State dispute settlement” does not, in its plain meaning, exclude a possibly broader range of dispute settlement mechanisms. First, there is no semantic reason why it could not encompass non-binding methods of dispute settlement between investors and States, such as conciliation, mediation, ombudsman, and so on. Second, even if one were to limit the scope of the term to binding means of dispute resolution, “ISDS” could well encompass settlement methods beyond the current arbitral system, for instance the MIC. In other words, the current use of the term “ISDS” does not make clear what is the defining characteristic of “ISDS” vis-à-vis “other” mechanisms. Is it the investor’s standing to bring a claim in its own name against the State (if so, ISDS would include investment arbitration, with or without an AM, MIC, and domestic courts)? Or is it the fact that the dispute resolution method is international as opposed to national? Or is it a combination of both criteria, such that only means of dispute resolution that offer investors direct access to an international forum qualify as ISDS?

9.
Absent clarity as to the contours of what constitutes ISDS (and what does not), and in light of the fact that the ongoing reform discussions as well as the present study seek to reflect upon several distinct dispute settlement mechanisms beyond investment arbitration, for the sake of clarity this study will avoid employing the term “ISDS” to the extent possible. It will instead refer to the different (binding) methods of investment dispute resolution on the international plane using the following terms, which in the authors’ view capture more precisely their defining characteristics: