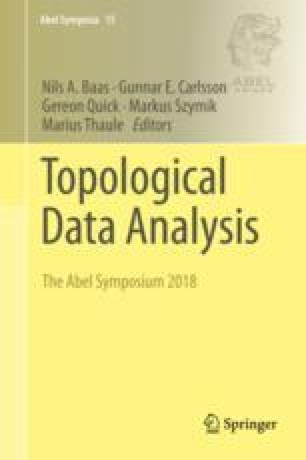 One of the core advantages topological methods for data analysis provide is that the language of (co)chains can be mapped onto the semantics of the data, providing a natural avenue for human understanding of the results. Here, we describe such a semantic structure on Chen’s classical iterated integral cochain model for paths in Euclidean space. Specifically, in the context of population time series data, we observe that iterated integrals provide a model-free measure of pairwise influence that can be used for causality inference. Along the way, we survey recent results and applications, review the current standard methods for causality inference, and briefly provide our outlook on generalizations to go beyond time series data.

D.L. is supported by the Office of the Assistant Secretary of Defense Research & Engineering through ONR N00014-16-1-2010, and the Natural Sciences and Engineering Research Council of Canada (NSERC) PGS-D3.

Chen’s formulation of a cochain model begins by defining a de Rham-type cochain complex AdR on a general class of spaces called differentiable spaces, generalizing the usual differential forms defined on manifolds. Path spaces are examples of differentiable spaces, and thus are associated with such a de Rham cochain complex. By defining iterated integrals using higher-degree forms on \(\mathbb {R}^N\), rather than the 1-forms used in Definition 1, we obtain forms on \(P\mathbb {R}^N\) rather than functions. Finally, he shows that the forms generated by iterated integrals form a subcomplex of AdR, that is, in fact, quasi-isomorphic to AdR. A detailed account of this construction is found in [11], and a more modern treatment can be found in [17].

Smooth structures are defined on manifolds by using charts to exploit the well-defined notion of smoothness on Euclidean space. Charts can be viewed as probes into the local structure of a manifold. However, as homeomorphisms of some Euclidean space of fixed dimension, charts are a rather rigid way to view local structure as they are both maps into and out of a manifold. Differentiable spaces relax this homeomorphism condition, and only require its plots, the differentiable space analog of a chart, to map into the space. Baez and Hoffnung [3] further discuss these ideas, along with categorical properties of differentiable spaces.

A differentiable space is a set X equipped with, for every Euclidean convex set \(C \subseteq \mathbb {R}^n\) with nonempty interior and for any dimension n, a collection of functions ϕ : C → X called plots, satisfying the following:

Linearity, the wedge product, and the exterior derivative are all defined plot-wise. Namely, given ω, ω1, ω2 ∈ AdR(X), \(\lambda \in \mathbb {R}\), and any plot ϕ : C → X,
Therefore, AdR(X) has the structure of a commutative differential graded algebra, and we may define the de Rham cohomology
$$\displaystyle \begin{aligned} H^*_{dR}(X) \mathrel{\mathop:}= H^*(A_{dR}(X)) \end{aligned} $$
of differentiable spaces.

From here forward, we will focus on the case of forms on \(P\mathbb {R}^N\), for which there is a special, easily understood class of forms defined using iterated integrals. Much of what we explicitly construct can be lifted to paths in manifolds of interest,or to more general mapping spaces, and will be discussed in forthcoming work by the authors.

This theorem is proved by showing that the \(Chen(P\mathbb {R}^N)\) is closed under the differential and the wedge product. As we will not make use of the details, we refer the reader to [11] for further discussion of the differential, noting only that the additional forms \(\pi _0^*(\omega _0)\) and \(\pi _{1}^*(\omega _{k+1})\) are required for closure. The wedge product structure is analogous to the shuffle product identity in Theorem 3, and is proved in a similar manner. Note that the wedge product structure for 0-cochains is exactly Theorem 3.