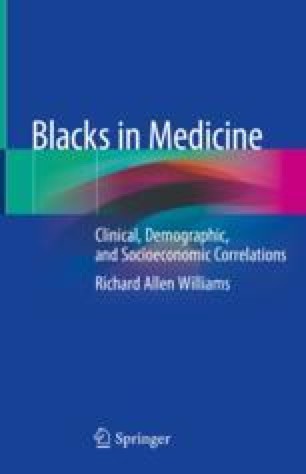 We begin this chapter with a description of some of the most unusual people ever to practice the art of medicine. These are the slave doctors who were largely untrained except in some cases by their slave masters who were physicians themselves. Although still in bondage, they demonstrated unusual medical and surgical skills which prompted their masters to allow them to treat their fellow slaves, especially in emergency situations. Some of them were actually apprenticed to their masters and, after completion of their training, were permitted to establish formal practices, ultimately earning enough to purchase their freedom.

These early black practitioners gave rise to formally trained physicians who struggled to carry on the tradition of treating their own people against very difficult odds. Eventually, a group of more sophisticated but no less dedicated African American doctors evolved who were committed not only to helping their people survive clinically but also to establishing a footprint of educational, academic, and scholastic excellence that endures to this day. This is the story of the emergence, education, and evolution of the black physician from the time he rose up during slavery through the throes and agony of the Civil War and Reconstruction and progressed into the postwar Jim Crow era and beyond. It is truly a story of triumph over adversity that is one of the most poignant that this nation has ever seen.