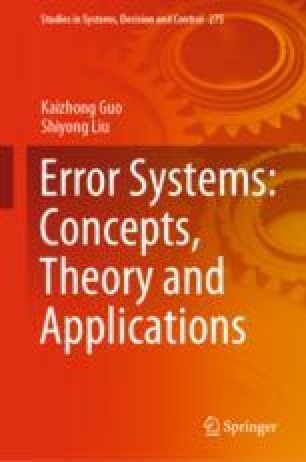 A person alive can become inorganic matter after he dies. A person of role model can become an evildoer to the society due to the influences of internal factors and his surrounding environment. Therefore, a system without error becoming an error system is generally caused by change, transition, or transformation of original system structures. There was an old story in China about how an old wise farmer had divided his heirs to his three sons. This old farmer only had 17 camels. His distribution scenario was to give half of his wealth to the oldest son, 1/3 to the second son, and 1/9 to the youngest son. However, it was not possible for him to have the scenario implemented since he only had odd number of camels. His neighbor just passed by as he was contemplating how he should do it. Having understood the farmer’s difficulty, the neighbor decided to lend the farmer one camel. Right now, the old farmer had 18 camels to be divided. The oldest son then got 9 of the 18 camels. The second son got 6 which is 1/3 of all the camels. And the youngest son got 2 which is 1/9 of the 18 camels. Therefore, the total number of camels allocated to three sons was 17 and the neighbor took his camel back. This story told us that addition transformation can help resolve challenging issue. Chairman Mao ever indicated in his masterpiece On Contradiction and Practice “Contradictions can transform to their opposite sides under certain conditions [167].” The world exhibits diverse, dynamic, vibrant states due to the mutual transformations of contradictions. System structures determine system behaviors. In a typical soccer team, a badly structured team (position of team member) dooms to fail in a match. The phenomenon that an organic molecule or a cluster transforms into different forms with the same chemical composition and configuration is called isomerism. Similar phenomenon also occurs in the social context. For instance, a same team with different arrangements in its members can achieve different functions. In Lego game, by changing the configurations and structures, one can build many different objects using same amount of Lego block pieces. Therefore, we need to investigate the mechanisms and laws on how structures of error system change over time and space in order to study the temporal and spacial characteristics of errors as well as the transitions and transformations of them. In the context of error system, we need to examine the temporal and spatial dynamics, direction, and sequence of acting system elements. The steps we will adopt is: (1) using structure diagram to illustrate related transformations; (2) employing corresponding logical connectives to investigate the laws of transformations; (3) examining the relationship between system structure and errors by understanding the relationship between system structure and system’s features(In this book, features of system indicate the functionality of a system. We use this word “feature” instead of “function”, although it is not semantically matching the exact meaning of functionality, for preventing generating ambiguity because function is often used to indicate the mathematical function.) and functionality.