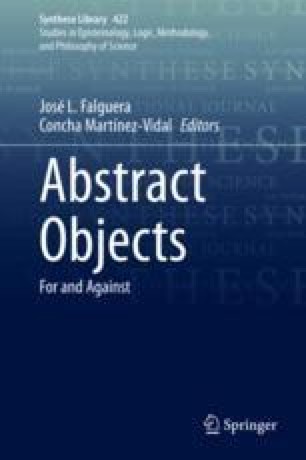 Part of the material of this paper has been presented in courses on natural language ontology in Duesseldorf, ESSLLI in Sofia (Bulgaria), and Munich in 2018 as well as at NYU (May 2019) and the IHPST, Paris (July 2019). The paper has benefitted greatly from discussions with the audiences as well as from numerous conversations with Kit Fine, exchanges with Noam Chomsky and Donca Steriade, as well as comments by Matti Eklund, Jonathan Schaffer, and an anonymous referee on a previous version of this paper.

Appendix: Some Potential Issues for the Abstract Object Hypothesis

In this appendix, I will briefly discuss some issues that appear problematic for the Abstract Objects Hypothesis.

First, there is a notion of an abstract state that, it has been argued, plays a role not just for the semantic values of reifying terms of the sort the state of being happy, but also as implicit arguments of stative verbs. Thus, Maienborn (2007) introduced a distinction between abstract states (‘Kimian states’ as she calls them Kim 1976) and concrete states (‘Davidsonian states’ as she calls them Davidson 1967). Both sorts of states, she argues, act as arguments of stative verbs. Abstract states are implicit arguments of of abstract state verbs such as owe, own, know, be, have, and resemble (see also Moltmann 2011). Unlike concrete state verbs like sleep and sit, abstract state verbs do not accept a range of adverbial modifiers, such as causal and locational adverbials, and that is, so Maienborn, because of the ontology of abstract states, which lack causal roles and a spatial location. Abstract state verbs certainly are part of the core of language, which is in conflict with the Abstract Objects Hypothesis. Maienborn’s view, though, is not uncontroversial. There are alternative accounts of the ‘stative adverb gap’, as it is called. One of them takes stative verbs to lack an event argument position to be filled in by states (Katz 2003). Another account takes adverbial modifiers to apply to truth makers rather than event arguments of verbs, or at least when modifying stative verbs (Moltmann 2007).

Another apparent issue for the Abstract Objects Hypothesis is kinds and the applicability of existence predicates (Moltmann 2020). Existence predicates impose particular conditions on what sorts of objects they can apply to, with or without temporal or spatial modifier. Roughly, the generalization is that existence predicates can apply to an entity o relative to a location l just in case o is completely present throughout l (Moltmann 2020). The complete presence condition throughout a location has the consequence that existence predicates with temporal modifiers apply only to enduring objects and not events (Sect. 13.4.2). With spatial modifiers existence predicates can apply to only few sorts of entities (illnesses, languages, and kinds), and that is because those sorts of objects have abstract part structures permitting them to be present at multiple spatial locations at once. As entities with an abstract part structure, kinds then will have to be abstract objects themselves (rather than, say, pluralities of possible and actual particulars). However, other predicates than existence predicates just do not treat kinds as abstract objects, as we have seen in Sect. 13.5. There is a solution to this puzzle, and that is to take the constitutive features of kinds not to be abstract properties, but rather kinds of tropes (particularized properties). Kinds of tropes are present throughout a location just in case they have instances throughout the location.

Another issue with the core-periphery distinction is that philosophers drawing on natural in support of an ontological view sometimes make use of expressions from the ontological periphery of language. For example, Vendler (1967) made use of the reifying term the fact that S to argue for a distinction between facts and events. I myself in Moltmann (2004, 2013a) made of use of reifying terms like the property of being wise to argue for a distinction between properties and kinds of tropes (the semantic values of terms like wisdom). Here the use of reifying terms is legitimate as it serves to show an ontological difference between a type of entity from the core and a type of entity already in the periphery. The term from the periphery is associated with intuitions ordinary speakers have – the periphery is not reserved for philosophers only. Of course, using technical terms that a particular philosopher may have introduced in the context of a philosophical theory would be a different matter.