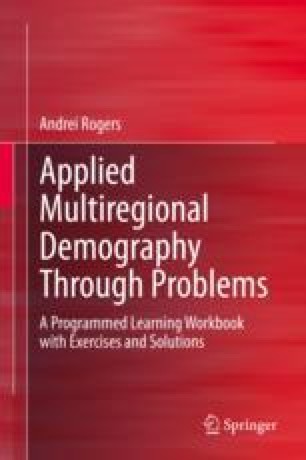 The evolution of every regional human population is governed by the interaction of births, deaths, and migration. Individuals are born into a population, age with the passage of time, reproduce, and ultimately leave the regional population because of death or outmigration. These events and flows enter into an accounting relationship in which the growth of a regional population is determined by the combined effects of natural increase (births minus deaths) and net migration (inmigrants minus outmigrants). This chapter focuses on such relationships and seeks to identify and clarify some of the more fundamental population dynamics that are involved. The mechanics of multiregional population projection typically revolve around three basic steps. The first ascertains the starting age-region distributions and the age-specific regional schedules of fertility, mortality, and migration to which the multiregional population has been subject during a past period; the second adopts a set of assumptions regarding the future behavior such schedules; and the third derives the consequences of applying these assumed schedules to the initial population stock.