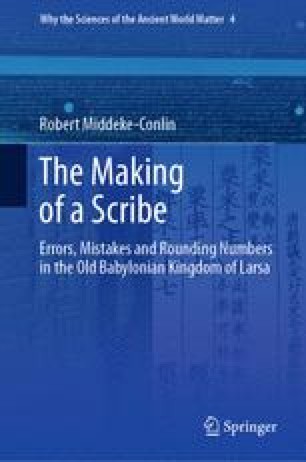 Observation and the Limits of Numeracy

This chapter explores measurement practices in the kingdom of Larsa in order to examine whether the scribes who accounted for these measurements were aware of discrepancies inherent in their measurements, as well as how they understood and used their own measurement values. While mathematical texts like YBC 04669 show measurements were based on one uniform system of standards, the standards themselves showed microcultural and cultural variations between and within centers of the kingdom of Larsa. The measurement tools themselves were inconsistent. However, microcultural and cultural variations had to be transcended if goods were to move freely, so three different means to assess and then convert value between standards are shown: full remeasurement, sample measurements and change rate calculations and finally value estimates, including calculations of conversion rates. Examining full remeasurement in particular, it is shown that the scribes were probably aware of observational error and developed methods to cope with it, including truncating smaller values. Exploring possible reasons why truncation was acceptable, it is found that the metrological lists served to produce acceptable values, just as the numerical tables produced standard building blocks to calculate with sexagesimal place value notation, while deviation from these lists proved difficult at best.