The Affects, Cognition, and Politics of Samuel Beckett's Postwar Drama and Fiction 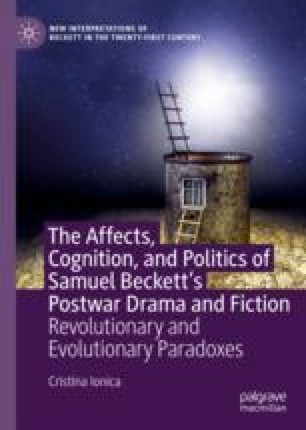 The Affects, Cognition, and Politics of Samuel Beckett's Postwar Drama and Fiction pp 117-178 | Cite as

Under-the-Radar Derision and Anger: Becoming Revolutionary in/ through Beckett’s Fiction

Keeping to the affect-based interpretive framework introduced in Chap.  2 and further developed in Chap.  3, this chapter examines Beckett’s trademark angry humour as articulated in his fiction, further defining his use of the “horrific-comic”—a category of humour directed, unlike earlier, opposition and disjunction-based forms, not at human foibles but at the self-perpetuating and self-serving logics of repression (religious, economic, Oedipal, or socio-political) that typically govern communal living. The last section of the chapter relates Beckett’s radically disruptive comedic mode to Neil’s recent theorization of revolution, which abandons the traditional anchoring of this concept to aspects like the central role of the proletariat/ the capture of the state. The chapter concludes that Beckett’s texts galvanize a form of solidarity free of the dangers of corporate/ authoritarian/ fascistic containment because it is based in a state of mutability facilitating immediate and continual transformation at the contact with others’ struggle and pain.

Cite this chapter as:
Ionica C. (2020) Under-the-Radar Derision and Anger: Becoming Revolutionary in/ through Beckett’s Fiction. In: The Affects, Cognition, and Politics of Samuel Beckett's Postwar Drama and Fiction. New Interpretations of Beckett in the Twenty-First Century. Palgrave Macmillan, Cham. https://doi.org/10.1007/978-3-030-34902-8_4