Moral Injury and the Promise of Virtue 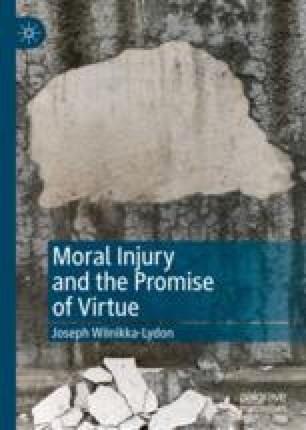 The previous chapters build an argument for the use of virtue language in analyzes of violent conflict. Throughout, the harm sustained through war, which many survivors witnessed to, has been referred to as a “moral injury.” In this final chapter before the conclusion, the conception of moral injury so far developed is compared to what I argue are the three main discourses of moral injury present in philosophical and psychological research: clinical (mostly psychology), juridical (mostly found in philosophy), and structural (mostly liberationist and feminist). The chapter ends by locating this work’s understanding of moral injury among these other discourses and creating, in the end, an understanding of moral injury understood through the frame of moral subjectivity and virtue discussed thus far. The analysis ends with a more robust understanding of the morally injurious subjectivities that Dizdarević and Maček witnessed to.