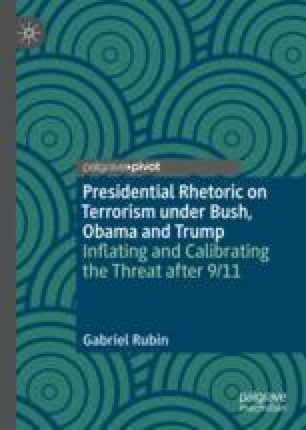 Presidential Rhetoric on Terrorism under Bush, Obama and Trump pp 81-103 | Cite as

Barack Obama: From an End to Terror to Drone Wars and ISIS

Barack Obama attempted to recalibrate presidential rhetoric on the terror threat. He made far fewer speeches about terrorism than George W. Bush did. Yet, despite some efforts to the contrary, he continued many of Bush’s policies—and in the case of targeted assassinations using drones (unmanned aerial vehicles), went further than Bush. The analysis of Obama’s rhetoric on terrorism shows a president who both wants to distance himself from his predecessor and one who wants to be seen as tough on terrorism. In the final analysis, Obama’s rhetoric and policies hewed rather closely to George W. Bush’s. This chapter raises questions about how the terror threat can be recalibrated given Obama’s failure to properly evaluate the threat from ISIS. It also shows that presidents do not need to speak much about an issue when policies to deal with it have already been passed.