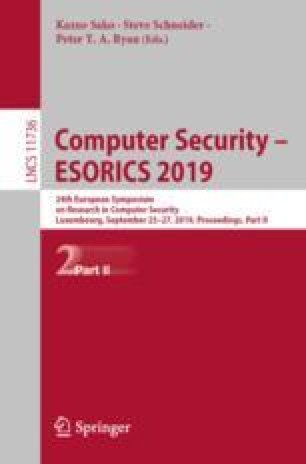 Despite numerous efforts to mitigate Cross-Site Scripting (xss) attacks, xss remains one of the most prevalent threats to modern web applications. Recently, a number of novel xss patterns, based on code-reuse and obfuscated payloads, were introduced to bypass different protection mechanisms such as sanitization frameworks, web application firewalls, and the Content Security Policy (csp). Nevertheless, a class of script-whitelisting defenses that perform their checks inside the JavaScript engine of the browser, remains effective against these new patterns. We have evaluated the effectiveness of whitelisting mechanisms for the web by introducing “JavaScript mimicry attacks”. The concept behind such attacks is to use slight transformations (i.e. changing the leaf values of the abstract syntax tree) of an application’s benign scripts as attack vectors, for malicious purposes. Our proof-of-concept exploitations indicate that JavaScript mimicry can bypass script-whitelisting mechanisms affecting either users (e.g. cookie stealing) or applications (e.g. cryptocurrency miner hijacking). Furthermore, we have examined the applicability of such attacks at scale by performing two studies: one based on popular application frameworks (e.g. WordPress) and the other focusing on scripts coming from Alexa’s top 20 websites. Finally, we have developed an automated method to help researchers and practitioners discover mimicry scripts in the wild. To do so, our method employs symbolic analysis based on a lightweight weakest precondition calculation.

We would like to thank the reviewers for their insightful comments and constructive suggestions. This work has received funding from the European Union’s Horizon 2020 research and innovation programme under grant agreement No. 825328.

We present two additional attacks to further illustrate the impact of JavaScript mimicry. In particular, we discuss an Ajax-based and a dom manipulation attack against two popular web sites (coming from Alexa top 20). Note that, given the dynamic nature of the scripts that are employed, none of the defenses could prevent those attacks.

First, we show how we can manipulate the api of sohu.com to up-vote the post of a user. Specifically, we can reuse the following code:

When this code runs on the client-side, the user, identified by the userId value, automatically upvotes the current news article (news_id) via an Ajax get request. Given a stored xss vulnerability, journalists could force visitors who view their articles to automatically up-vote them by reusing this particular script.

A dom manipulation attack can be launched against amazon.com to force a user to logout. Consider the script shown in Fig. 6a, which performs requests on the server. In line 1, a (jQuery) function is defined and set to be executed when certain criteria are met. In lines 2–13 variables u, t, and p are set. Then, they are used in the function defined in lines 14 to 17 when a specific html element (#dmimglnch_1518480003) is clicked. If this is the case, the function invokes the window.open function providing the aforementioned variables as parameters.

A corresponding malicious script can be seen in Fig. 6b. In this script we omit the values of variables t and p (we do not need them), and modify variable u so that it includes the url used by amazon.com to logout users. In addition, we alter the initial script’s specified html element (line 14 of Fig. 6a), so that it now specifies the whole html body (line 8, Fig. 6b). In this way, when the criteria defined in line 1 are met, and a logged in user clicks on any part of the page, he or she would immediately logout.