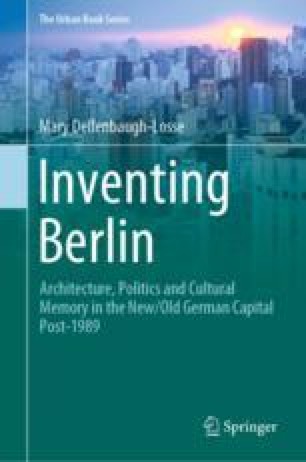 This chapter introduces the main concepts that will be discussed in this book, architecture, urban planning, memory, legitimate history, and post-socialist path-dependency, as well as its subject, East Berlin. It furthermore presents the fundamental assumption on which this study is based, namely that choices about architecture and symbolism in capital cities are attempts at concretizing the values and identity of that country’s residents (or at least the dominant group). Following this assumption, this book argues that the architectural and urban planning choices in Berlin after the fall of the Berlin Wall reflect specific choices about legitimate identity, memory, and history in reunified Germany. Chapter one introduces the three questions which will frame this study, namely: What do changes to the cultural landscape of East Berlin reveal about official narratives of German identity after 1990? In which ways is East Berlin a “typical” post-socialist city and in which ways is it a special case? And who were the key actors, what tactics did they employ and how did their influence and methods change over time?

There is perhaps no other major Western city that bears the marks of twentieth-century history as intensely and self-consciously as Berlin. This city-text has been written, erased, and rewritten throughout this violent century, and its legibility relies as much on visible markers of built space as on images and memories repressed and ruptured by traumatic events.