Histories of Computing in Eastern Europe 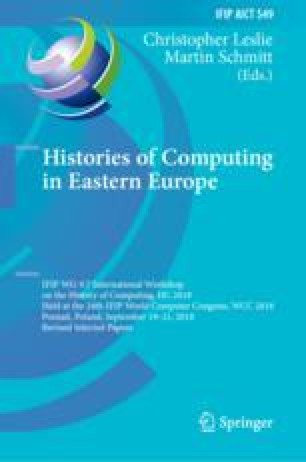 IFIP International Conference on the History of Computing

Cooperating with Moscow, Stealing in California: Poland’s Legal and Illicit Acquisition of Microelectronics Knowhow from 1960 to 1990

Electrical calculating machines were designed and manufactured in Poland in small quantities during the 1950s. However, it soon become clear to the government that an autonomous advance in that cutting-edge discipline was simply impossible. Therefore, throughout the 1960s, Polish authorities established various channels of obtaining access to software solutions, transistors and especially integrated circuits that seem to become standard for years to come. The way of adopting IT by communist Poland did not differ much from how it was done in USSR – according to the model described by Mastanduno. It was a smart combination of legal measures like the use of trade agreements, official scientific-technical cooperation and illicit operations run with help of intelligence assets like bribing or blackmailing officials and employees, establishing fake intermediating companies for purchasing embargoed dual-use items. Therefore, medium and large-scale-integration-technology as well as specific types of computers like mainframes, minicomputers and later PCs along with peripheral devices came to the Polish People’s Republic through many routes. Moreover, Polish intelligence intensified its cooperation and information sharing with Soviet foreign intelligence service – like its counterparts in GDR, Hungary, etc. As a result, not only ties to the Western world were organized over and under the table, but also relationships with allies in Comecon were arranged in two dimensions. The case of Poland gives an excellent example of how schizophrenic the computer market under Comecon during the 1970s and 1980s was. This paper refers to the research project conducted by the author in the Institute of National Remembrance since 2011 and at the Jagiellonian University since 2018, entitled: “Scientific-technical intelligence of PPR: functions, organization, efficiency.” In this contribution the author presents the outcomes of the analysis of the Polish archival sources completing them by foreign archives and secondary sources.

Appendix – Statistics on Intelligence Gathering from 1987 to 1989

The data is selected and juxtaposed by the author. It originated from three extensive reports of STI’s Chief covering all STI areas of activity. Some numbers below can be incoherent one to another (Table 1).
Table 1.

Efficiency of the Division VI of the Department I in the Ministry for Internal Affairs from 1987–1989. Scope of activity: intelligence gathering in the domains of IT, microelectronics, programming, automatic control systems etc.