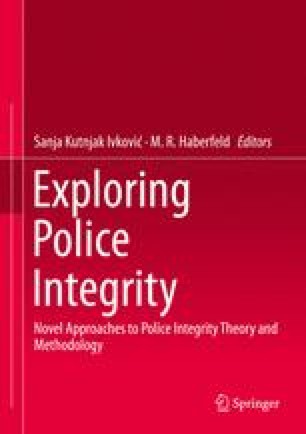 Police Integrity and the Perceived Effectiveness of Policing: Evidence from a Survey Among Ugandan Police Officers

Research on police integrity has focused to a large extent on the assessment of the seriousness of various forms of police misconduct. Employing vignettes cases it has been shown that police officers identify clear differences among forms of misconduct and these differences largely hold across countries and contexts. Moreover, the impact of a range of individual and organizational characteristics on the assessment of misbehavior has been established. This chapter analyzes the impact of perceptions of the institutional environment and police effectiveness among Ugandan police officers to assess the external validity of the assessments of the seriousness of misconduct presented in the vignettes. The research focuses on ten aspects of police officers’ perceptions of the institutional environment and police effectiveness and shows that the perceptions are strongly interrelated and that they impact on attitudes towards police integrity. Thus, while the vignettes are meant as a tool to reduce subjective biases in the evaluation of police misbehavior, the assessment of the vignettes is not free of individual perceptions. This suggests that the vignettes can be seen as means to channel and represent the individual subjective biases in a coherent and comparable form.

Note: The number of observations per case and response is 600

Note: The regressions are based on 600 individuals and their responses to 12 cases resulting in 7200 observations. All regressions include case specific and district specific effects (not shown). Individual level socio-economic characteristics that are controlled for but coefficients are not shown: age, gender, marital status, whether the respondent is household head, education level (dummies for secondary, advanced secondary and higher education, excluded category: primary education), household size, income level (dummies), number of habitable rooms in the house, number of mobile phones owned, whether the person does sports and whether the person is a member of a community organization. Work related characteristics that are controlled for but coefficients are not shown: Years of service, rank (high rank and medium rank, low rank forms the excluded category), number of rooms of the police station, number of police cars, number of police motorcycles, number of police bicycles, Police section (traffic, investigation, intelligence, general duties, excluded category: Other sections and duties). Standard errors are clustered at the level of the individual respondent

Note: Compare note to Table 5 for detailed information about the employed empirical specifications

Group 1: Code of Conduct Among the Police Officers

Case 1: A police officer, who happens to be a very good auto mechanic, is scheduled to work during coming holidays. The supervisor offers to give him these days off, if he agrees to repair her/his personal car. Evaluate the supervisor’s behavior.

Case 3: A police officer routinely accepts free meals, cigarettes, and other items of small value from merchants on his duty. S/he does not solicit these gifts and is careful not to abuse the generosity of those who give gifts to her/him.

Case 4: A police officer stops a motorist for speeding. The officer agrees to accept a personal gift of half of the amount of the fine in exchange for not taking the offending motorist to court to answer to charges for the traffic offence.

Case 5: A police officer finds a wallet in a parking lot. It contains an amount of money equivalent to a full day’s pay for that officer. S/he reports the wallet as lost property but keeps the money for her/himself.

Case 6: A police officer discovers a burglary of a general merchandise shop. The display cases are smashed, and it is obvious that many items have been taken. While searching the shop, s/he takes 10 jerricans of cooking oil and 1 sack of posho of 100 kilograms worth about a month’s pay for that officer. S/he reports that the items had been stolen during the burglary.

Case 7: A formerly arrested man comes to the police station and wants to fill in a complaint form. He claims that he was not treated properly during his arrest. The police officer who is in charge laughs at him and sends him away.

Case 8: A men goes to a police station to register a complaint over one of their officers who had beaten and tortured him. At the station he finds a friend of the officer who tortured him. The friend refuses to register his complaint and instead decides to detain him for a weak over giving false information to the police. Evaluate the behavior of the friend.

Group 5: Reported Severe Crimes Against Individuals Not Followed Up Upon

Case 9: A women goes to the police station to report a case where her husband has been beating her for the last one year. She lost one of her teeth and has a damaged eye due to the beating. The police officer on duty thinks this is a mere family dispute and not a crime for the police to handle. S/he refuses to register the case.

Case 10: A police officer on duty receives a woman who wants to register a case of murder of her child by a neighbor. The officer registers the case and promises to follow up and arrest the suspect in a few hours’ time. Two days down the road, the suspect has not been arrested and was sending messages threatening to harm the complainant. The woman went back to the same police station to report the scenario and the suspect was arrested and detained at the police station. However, the suspect was released immediately on account that there was not enough evidence to convict him. Evaluate the behavior of the police officer who first received the woman.

Case 11: Two police officers on foot patrol surprise a man who is attempting to break into a shop. The man flees. They chase him for about ½ a kilometer before apprehending him by tackling him and wrestling him to the ground. After he is under control, both officers punch him a couple of times in the stomach and step on his back several times as punishment for fleeing and resisting.

Case 12: A sub-district has a challenge of water shortage for a period of four months. The area leader together with residents decide to petition national water for the poor services and failure to deliver. However, the situation continues for two more months. The area leader and the residents opt to stage a peaceful demonstration as a way of showing their dissatisfaction. No sooner had the demonstration started than the District Police Commander deployed a team of officers with teargas and firing of live ammunitions killing 20 of the demonstrators including the area leader. Evaluate the District Police Commander’s behavior.