Narratives and Reflections in Music Education 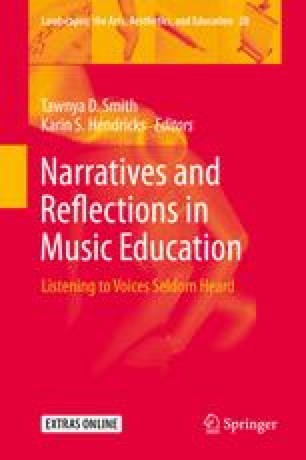 Narratives and Reflections in Music Education pp 179-188 | Cite as

This chapter is an interview with Mary Jane Doherty, Associate Professor of Film in the College of Communication at Boston University. The original interview followed the showing of her short film, Let the River Run, a portrait of the children of the Boston Children’s Chorus (BCC) at the NIME6 Conference. The BCC is a community-based chorus that aspires to transcend social barriers through music making.

Mary Jane is known for her innovative narrative documentary style through a number of films including Gravity (1985), a film about experimental astrophysics, and Secundaria (2013) and Primaria (2016), films about the Cuban ballet system. She is a master teacher who has been nominated for several awards by her students at Boston University. In 2017, she won the City of Boston Artist Fellowship in its inaugural year.

The film, Let the River Run, follows several children who are members of the Boston Children’s Chorus. Mary Jane captures their experiences at home, in rehearsal, in interviews, and in performance as a way to invite the viewer into the children’s lived sonic world. The children are the teachers in this story; from them we learn the fundamentals of pitch and rhythm, what shoes to wear, how sound travels in and out of our brains. But they also teach us the most by what they do not say. And this is the deeper idea of the film—that the essence of singing with others is a feeling that can’t be explained in words. One has to listen to the music with them, feel what it is like to sit among them as they make a glorious sound together.

This interview is included in this volume so that both Mary Jane’s film and the following discussion of her creative process may offer narrative researchers insights for considering narrative beyond the printed page. Mary Jane also shares her approach for building positive relationships with those she is filming, which is an important consideration when working with those whose voices have been marginalized or are seldom heard.