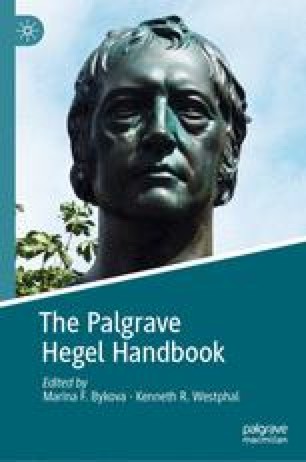 A key term in Hegel’s arsenal is Aufhebung, usually translated as “sublating”. Because the German word can be used to express “annul”, “preserve”, and “transform”, it has become a favorite tool for explaining some of his more intricate dialectical moves. Hegel, however, appends the note in which he develops the significance of the term to the first chapter of his Science of Logic, in which he moves from pure being, through nothing and becoming to determinate being, or Dasein. By analyzing the dynamics of that argument we can develop a detailed picture of the way a doubled transition, by collapsing into a new isolated unity, both annuls and preserves the constituent terms while transforming them into an integrated result. Support for this reading is found in some passages from the Critique of Pure Reason, and in several additions that Hegel makes to the second editions of the Science of Logic and the Encyclopedia. The pattern of Aufhebung finds expression not only in the detailed arguments of the Science of Logic but also in the structure of the work as a whole; in the developmental process described in the Phenomenology of Spirit as well as in the concept of recognition, and in the double transition from consciousness to self-consciousness and back again; and in the organization of the Philosophy of Right. For Hegel nature does not have a developmental process, so the organization of the Philosophy of Nature is engineered by conceptual thought, which sets out a framework that structures what to look for in the natural world, looks for empirical evidence of what actually happens within that stage, and then integrates what it discovers with its conceptual resources to set the framework for the next stage of the argument. Once the sciences of geology and biology have established that nature has a history, however, one need not follow Hegel in denying that there are metamorphoses in nature. Rather nature itself has examples of processes rather like that described by the concept, Aufhebung. If that turns out to be a fundamental characteristic of the way the world functions, then it opens up the possibility of exploring the reciprocal relationship that moves from the patterns of the natural world to the conceptual structures of abstract thought and back again, and transforms the way Hegelian thought can be applied in our understanding of the world in which we live.