Cemeteries and the Life of a Smoky Mountain Community 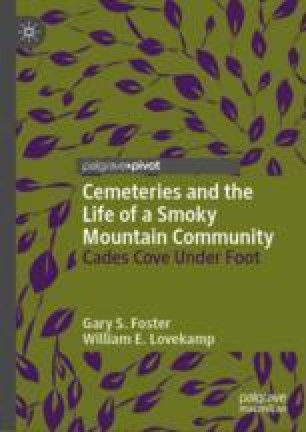 A Conclusion to the Story of Cades Cove’s Cemeteries

Cades Cove, as is any community, is a socially constructed reality on the cultural landscape, but it has been socially constructed twice, once by the historical residents who delineated the community over time, and once by the National Park Service that razed some structures while preserving others to present and commemorate a selective version of the cove as a nineteenth-century mountain community. More people visit the social reconstruction than would have visited the original social construction of Cades Cove as community. In that context of social construction and reconstruction, perhaps the cemeteries remain as the most authentic representation of and a window into the community as it was constructed and intended by those residents of 100 years ago and more. Regardless of the version of Cades Cove encountered and perceived, its cemeteries remain a constant.