The Challenges of Creating Democracies in the Americas 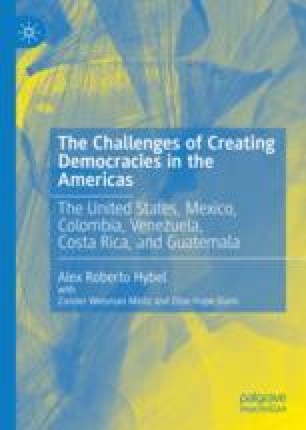 The final chapter consolidates the conclusions derived from the empirical examinations of the six cases. It presents 22 time-related hypotheses that explain the evolution of the state-creation and regime-formation processes of the United States and five Spanish American entities from the colonial period, to independence, to the present.

The six cases studied share at least four characteristics. First, none of their original inhabitants had a say on how the emerging states and their respective political regimes in the two continents should be structured. Second, none of the original leaders of the states initially created intended to create a democratic regime. Third, the political, economic, and social environments developed during the colonial period affected the extent to which the established elites within a colony would be committed to the attainment of independence. Those conditions also shaped the types of states and political regimes the original leaders initially tried to create after they had freed themselves from their colonial powers. And fourth, with the passage of time each state and its political regime encountered additional sets of conditions engendered by developments in the domestic and international arenas. The new conditions determined whether a democratic regime would evolve.

Cite this chapter as:
Hybel A.R. (2020) An Exploratory Theory of State Creation and Democratization: The United States, Mexico, Venezuela, Colombia, Costa Rica, and Guatemala. In: The Challenges of Creating Democracies in the Americas. Palgrave Macmillan, Cham. https://doi.org/10.1007/978-3-030-21233-9_7