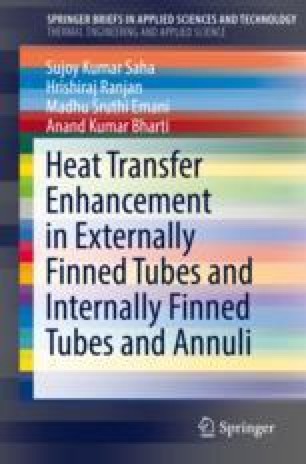 Round Tubes Having Plain-Plate Fins

The performance characteristics of round tubes having plain-plate fins are discussed in this chapter. The concepts of wavy fins, louvred fins, multi louvred fins, fin numbering, etc. are explained in detail. Staggered and in-line arrangement of tube bundles and fin spacing are the other topics covered here. The correlations for configurations are also presented.

Plain-plate fins Wavy fin Louvred fin Multi-louvred fin In-line arrangement Staggered arrangement
Download chapter PDF
Ohara and Koyama (2012) investigated the heat transfer and flow pattern experimentally in a plate-fin heat exchanger. They studied the thermo-hydraulic characteristics of falling film evaporation of pure refrigerant HCFC123 in a vertical rectangular channel with a serrated fin surface. The rear wall of the channel and evaporator was heated by electricity and liquid refrigerant flowing down vertically on it. The flow pattern was observed directly through transparent vinyl chloride resin plate during evaporation process. Experimental setup was supplied with constant mass velocity (G = 28–70 kg/m2s), heat flux (q = 20–50 kWw/m2) and pressure (P = 100 kPa). It was observed that when the vapour quality was more than equal to 0.3, heat transfer coefficient depended on the values of both mass velocity and heat flux. Figure 2.1 shows the variation of heat transfer coefficient with respect to vapour quality for heat fluxes of 20, 30, 40 and 50 kW/m2, respectively. Figure 2.2 shows the variation of Nusselt number with respect to Reynolds number for mass velocity of 28, 40, 55 and 70 kg/m2s, respectively.
Thermo-hydraulic characteristics in air-cooled compact wavy fin heat exchanger was reviewed and analysed by Awad and Muzychka (2011). They developed the new model to simplify the existing studies of Fanning friction factor f and the Colburn j factor. These models were developed by establishing the correlation between low Reynolds number and laminar boundary layer regions. The prepared model was based upon the geometrical and thermophysical parameters such as fin height (H), fin spacing (S), wave amplitude (A), fin wavelength (λ), Reynolds number (Re) and Prandtl number (Pr). They compared the proposed model with numerical and experimental data of published literature for air. Figure 2.3 shows characteristic dimensions and top view of a basic cell of wavy fin geometry. Muley et al. (2002, 2006), Muzychka (1999), Muzychka and Kenway (2009), Sheik Ismail et al. (2009, 2010), Zhang (2005), Zhang et al. (2003, 2004), Junqi et al. (2007), Rush et al. (1999) and Lin et al. (2002) also studied the effect of fins in heat exchanger.
Bahrami et al. (2012) studied numerically and experimentally about the effect of geometric parameters of multi-louvred fins of compact heat exchangers on the heat transfer enhancement. They solved the three important thermophysical conservation equations of mass, momentum and energy using the finite volume method in various heat and flow conditions. Figure 2.4 shows the fin geometric parameters such as fin width (Fd) and fin pitch (Fp). Figure 2.5 shows the variation of pressure drop with inlet flow velocity or Reynolds number for the louvred angles of 18°, 24°, 26°, 28° 30° and 38° at the fin pitch of 1.3 mm. They observed that increasing the louvre angles resulted in more deviation of the fluid and that causes more pressure losses in the fins. They found from results that thermal capacity and pressure drop decreased with increase in fin pitch. Pressure drop and heat capacity were lesser affected by louvre angle than fin pitch.
They found that in the second row of louvres at low Reynolds number, more pressure loss and less heat transfer took place. Therefore, they recommended removing the second-half of louvres and studied the effect of this type of fin having 26° louvre angle. Figure 2.6 shows the semi-louvred fin. The results indicated that thermal heat capacity increased up to 22% in the semi-louvred fin at 2 m/s inlet velocity. Therefore, they strongly recommended this type of fin heat exchanger in stationary refrigeration and air-conditioning system. Atkinson et al. (1998), Chang and Hsu (2000), Chang and Wang (1996, 1997), Chang et al. (1994), Dillen and Webb (1994), Dong et al. (2007), Lawson and Thole (2008), Lyman et al. (2002), Perrotin and Clodie (2004) and Sunden and Svantesson (1992) also studied the effect of louvred fin and tube heat exchanger on thermo-hydraulic characteristics.

Haghighi et al. (2018) conducted an experimental investigation in natural heat convection on thermal performance and convective heat transfer coefficient of plate fins and plate cubic pin-fin heat sink. He conducted the experimental investigation for Rayleigh number range of 8 × 106 to 9.5 × 106, heat input range of 10–120 W. Fin spacing and fin numbers were varied between 5 and12 mm and 5 and 9, respectively. They investigated the effect of fin spacing and number of fins of plate fins and plate cubic pin fin on thermal resistance and heat transfer. They found that plate cubic pin fin having 8.5 mm fin spacing and seven fins was better than plate-fin heat sink. They developed empirical correlations for average Nusselt number as a function of number of fin plates, fin spacing to height ratio as well as Rayleigh number.

Didarul Islam et al. (2008) reported the performance of rectangular fins having different patterns and placed in duct flow in different arrangements. Co-angular, zigzag, co-rotating and co-counter rotating configurations as shown in Fig. 2.10 have been used for the analysis. The friction factor variation with Reynolds number for the four configurations of fins, for different Prandtl numbers, has been shown in Fig. 2.11. The heat transfer coefficient correlations for different fin patterns and pitch ratios for a given fin height of 10 mm have been tabulated in Table 2.2. Also, the variation of η (ratio of Nusselt number of enhanced surface to the Nusselt number of plain surface) with f1/3 Re has been plotted and presented in Fig. 2.12. They have observed that the friction factor for all four fin patterns were greater than that for the smooth rectangular duct for fully developed turbulent flow. The maximum pressure drop was seen in the duct with co-rotating fins.
Table 2.2

This is because of strong flow interactions accompanied with vortex attack on the end wall and fin surface. The fins with co-angular pattern have showed minimum pressure drop. They have observed the smoke flow pattern around the fins and oil titanium oxide flow pattern on the end wall. They reported that they were both in good agreement. They have also observed that the flow over co-angular fin plate was governed by horseshoe vortices while wavy flow behaviour was dominant in the case of zigzag fin pattern. This is because the diverging fin pairs generate longitudinal vortices which attack the end wall and fin surfaces together. In case of co-counter rotating fin pattern, the flow was only slightly disturbed due to converging fin pairs. They concluded that the fin with co-rotating pattern with pitch ratio 2 and fin height 10 mm has shown the best thermal performance among all the fins considered. Also, the heat transfer using co-rotating fin pattern was noted to be threefold that of the duct without fins.

Sajedi et al. (2015) worked on optimization of fin numbering in a heat exchanger having external extended finned tube for natural convection. They carried out numerical investigation and presented the results for heat transfer rate and average Nusselt number. The experiment was carried out for fixed Reynolds number and varying Rayleigh number. They have compared the experimental results with the numerical results and developed correlation for Nusselt number. The fin geometry has been shown in Fig. 2.13. The comparison of surface temperatures of the heat exchanger for numerical and experimental results has been presented in Fig. 2.14 for different Rayleigh numbers. The number of fins was considered to be 20. The rate of entropy generation \( \left({\dot{S}}_{\mathrm{gen}}\right) \) and total heat loss (q) have been shown in Figs. 2.15 and 2.16, respectively.
The variation of average Nusselt number with the number of fins has been shown in Fig. 2.17. Three graphs have been shown to clearly present the average Nusselt number variation for different ranges of number of fins. They explained that as heat transfer surface increases and heat transfer coefficient decreases with the increase in number of fins, there is a definite need to obtain the optimum number of fins. For different cases considered for the analysis, the optimum number of fins ranged from 10 to 12.

Both pressure drop contributions are evaluated at the same minimum area mass velocity. On many occasions, it may happen that Reynolds number based on hydraulic diameter will not correlate the effect of fin pitch.

The friction factor with the tubes is obtained from a correlation for flow normal to a staggered bank of plain tubes. Zukauskas (1972) and Incropera and Dewitt (2001) give the tube bank correlation. McQuiston (1978) correlation based on the same data, however, does a poor job.

Mon and Gross (2004) numerically examined the fin-spacing effects by three-dimensional simulation of four-row tube bundles placed in staggered and in-line arrangements. It is complicated and difficult to understand geometrically complex bundles related to heat transfer characteristics. Thus, numerical model may help in better understanding and explanation. Saboya and Sparrow (1974, 1976), Sheu and Tsai (1999), Xi and Torikoshi (1996), Fiebig et al. (1995), Torikoshi (1994), Kaminski (2002), Kaminski and Groß (2003) and Romero-Méndez et al. (2000) studied finned tube heat exchangers and evaluated the influence of fin spacing but neither of them worked for annular-finned tube heat exchangers. They used the K-ɛ turbulence model and adopted respective equations. They simulated for Reynolds number range of 8600 ≤ Re ≤ 43,000 and presented Table 2.3 for the dimension of bundle of testing tube.
Table 2.3

All dimensions are in mm

They simulated both the in-line and staggered arrangement of tubes and concluded global flow behaviour, local flow behaviour, thermal boundary layer development and fin spacing effects on heat transfer and pressure drop characteristics. The results of global velocity distribution are presented in Fig. 2.21, and it is found that main stream has been encountered by larger surface area in staggered array, whereas larger wake regions are in in-line array. Their simulated result shows that secondary vortex has developed. They plotted the results which included heat transfer coefficient versus fin spacing to height ratio in Fig. 2.22a and heat transfer coefficient versus pressure drop in Fig. 2.22b for both staggered and in-line bundles. The simulation presented that heat transfer coefficient increased to 19% in all cases with increased S/hf from 0.32 to 0.8 simultaneously, whereas in case of staggered arrangement, the heat transfer coefficient was found to be increased up to S/hf = 0.32 and remained constant for further increase in S/hf ratio. They found that boundary layers between fins departing from each other for staggered arrangement. Pressure drop found to be decreased with both the arrangement as S/hf increased.
Seshimo and Fujii (1991) gave a more generalized correlation for staggered banks of plain fins having one to five tube rows. They correlated one- and two-row data in terms of entrance length by Eqs. (2.6) and (2.7).
$$ Nu=2.1{\left({X}_{\mathrm{Dv}}\right)}^n $$
(2.6)
$$ {fLD}_{\mathrm{v}}={c}_1+{c}_2\left({X}_{\mathrm{Dv}}\right)-m $$
(2.7)

For three or more rows, the entrance length-based correlations do not do justice to the data over the entire Reynolds number range (200 < ReDh < 800).