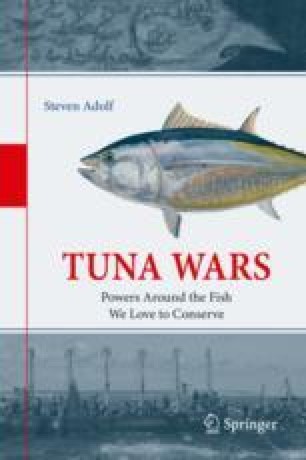 By 2010 the bluefin tuna situation in the Mediterranean seemed hopeless. I wrote a sombre book about the large-scale ‘wicked problems’ of the bluefin tuna catch and trade in the Mediterranean. It seemed merely a question of time before the last bluefin tuna would be fished out of the waters by a gang of poachers, sold by local despots and mobsters, and shipped to the Tsukiji market in Tokyo into the hands of a powerful tuna industry. Sustainable management seemed a lost cause. Despite the book’s gloomy message, I received many positive reactions from readers. Tuna had touched the hearts of an ever-expanding audience. NGOs made tuna one of the spearheads in their campaigns. Who would ever have thought this of a cold fish with a cuteness factor even lower than a shark? A growing group of consumers solemnly resolved only to eat sustainable tuna from now. Or they stopped eating tuna altogether. In short, tuna had suddenly become incredibly cool. Some people were so infected by the tuna bug that they took action themselves. One of these was Dutch violin maker Wietse van der Werf, one of the founders of The Black Fish Foundation: a citizens’ initiative whereby concerned tuna lovers disguised as tourists photographed the illegal driftnets and undersized tuna in Italian fishing ports as evidence. Something akin to a liberation movement for bluefin tuna sprang up: Black Fish managed to release hundreds of undersized, immature tuna from a fattening farm off the coast of Croatia [235]. Sea Shepherd, Greenpeace’s radical offshoot led by Captain Paul Watson, had even managed to free 800 undersized, illegally caught tuna from a purse seine off the Libyan coast in which they were being transported to a farm in Malta [236]. This was not without risk. Muammar Gaddafi, Libya’s ‘brotherly leader’, must have been furious about a small fortune’s worth of ‘his’ tuna having been cut free. The liberation campaigns, the pressure from the NGOs as well as Prince Albert of Monaco’s efforts for an international trade embargo on bluefin tuna: all this contributed to bluefin tuna suddenly becoming an item on the agenda of governments, the EU and tuna management organisation ICCAT. For the first time, management measures to save the fish from extinction received serious, firm impetus. And, to the genuine surprise of many, it actually appeared to work.