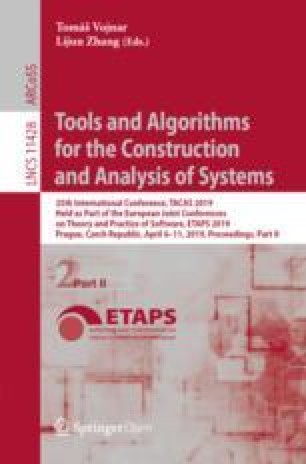 TACAS 2019: Tools and Algorithms for the Construction and Analysis of Systems pp 319-336 | Cite as

Symbolic-Heap Separation logic is a popular formalism for automated reasoning about heap-manipulating programs, which allows the user to give customized data structure definitions.

In this paper, we give a new decidability proof for the separation logic fragment of Iosif, Rogalewicz and Simacek. We circumvent the reduction to MSO from their proof and provide a direct model-theoretic construction with elementary complexity. We implemented our approach in the Harrsh analyzer and evaluate its effectiveness. In particular, we show that Harrsh can decide the entailment problem for data structure definitions for which no previous decision procedures have been implemented.

Separation logic (SL) [12, 18] is a popular formalism for Hoare-style verification of imperative, heap-manipulating programs. In particular, the symbolic heap separation logic fragment has received a lot of attention: Symbolic heaps serve as the basis of various automated verification tools, such as Infer [6], Sleek [7], Songbird [19], GRASSHopper [17], VCDryad [16], VeriFast [13], SLS [20], and Spen [9]. Many of the aforementioned tools rely on systems of inductive predicate definitions (SID) that serve as specifications of dynamic data structures, e.g., linked lists and trees.

At the heart of every Hoare-style verification procedure based on separation logic lies the entailment problem: Given two SL formulas, say \(\varphi \) and \(\psi \), is every model of \(\varphi \) also a model of \(\psi \)? While the entailment problem is undecidable in general [2], there are various approaches to decide entailments between symbolic heaps ranging from complete methods for fixed SIDs [3], over decision procedures for restricted classes of SIDs [10, 11], to incomplete approaches, such as fold/unfold reasoning [7] or cyclic proofs [5].

Among the largest decidable fragments of symbolic heaps with inductive definitions is the fragment of symbolic heaps with bounded tree-width (\(\text {SL}_{\text {btw}}\)) [10]. This fragment supports a rich class of data structures in SID specifications, such as doubly-linked lists and binary trees with linked leaves. \(\text {SL}_{\text {btw}}\) introduces three syntactic conditions on SIDs—progress, connectivity, and establishment—that enable a reduction from the entailment problem for \(\text {SL}_{\text {btw}}\) to the (decidable) satisfiability problem for monadic second-order logic (MSO) over graphs of bounded tree width. This gives rise to a decision procedure of non-elementary complexity—at least without an in-depth analysis of the quantifier alternations involved in the reduction. The reduction to MSO is also technically involved and has—to the best of our knowledge—never been implemented. The authors remark in the follow-up paper [11] that “the method from [10] causes a blowup of several exponentials in the size of the input problem and is unlikely to produce an effective decision procedure.”

Overview of our approach. We first present an algebra à la Courcelle [8] to systematically construct models of separation logic formulas (Sect. 2). This algebra enables us to conveniently formalize the semantics of separation logic (Sect. 3). To decide entailments, we then develop an abstraction mechanism for models with the following properties (Sect. 4):

Due to space constraints, all proofs are in the supplementary material [1].

Separation logic is typically interpreted in terms of stack-heap pairs consisting of a stack, i.e., an evaluation of variables, and a heap, i.e., a finite mapping from memory locations to values. In our setting, however, it is more convenient to abstract from locations and consider labeled graphs.

Heap graphs are an abstraction of the classical stack-heap model. To reason about separation logic with heap graphs (and their abstractions), we need a few operations for their systematic construction: Let \(f:\mathbf {Var}\rightarrow \mathbf {Var}\) be a partial function and \(f(\mathcal {M})\) its application to every variable in every component of \(\mathcal {M}\).

Figure 4 depicts the composition of two heap graphs representing lists of length two. Since both heap graphs share a variable \(a \notin \mathsf {FV}\), we first compute an isomorphic heap graph in which variable a is substituted by c in the second graph. Both heap graphs are then merged at their common free variable b. This results in a heap graph modeling a list of length four.    \(\triangle \)

([8]). Every non-empty heap graph of tree width at most k can be constructed from heap graphs \(x \rightarrowtail \mathbf {y}\), renaming, composition, and forgetting using at most \(k+1\) free variables.

We consider the symbolic heap fragment of separation logic with user-defined inductive predicate definitions. We omit pure formulas to simplify the presentation. Notice, however, that our implementation supports reasoning about symbolic heaps with pure formulas.

Symbolic heaps with bounded tree-width. Our goal is to develop a decision procedure for symbolic heaps with inductive definitions in the bounded tree-width fragment developed by Iosif et al. [10]. This fragment imposes three conditions on SIDs, which we assume for all SIDs \({\varPhi }\) considered in the following:Assumptions. We make two further assumptions for all SIDs throughout this paper: (1) Predicates are called with pairwise different parameters. (2) Unfolding predicates (iteratively substituting predicate calls \(\mathsf {pred}(\mathbf {y})\) with the right-hand sides \(\varphi [\mathsf {fv}(\mathsf {pred})/\mathbf {y}]\) of rules \(\mathsf {pred}~\Leftarrow ~\varphi \)) always yields satisfiable symbolic heaps. SIDs can be transformed automatically to satisfy (1) and (2) before applying our decision procedure (cf. [1, 14]). The SIDs in Figs. 1 and 5 satisfy all assumptions.

Running example. To sharpen our intuition, we present the technical details of our abstraction together with a running example: Fig. 5 shows an SID \({\varPhi }_{\text {lists}}\) specifying predicates for various singly-linked list segments. The predicate \(\mathtt {sll}(x_1,x_2)\) specifies non-empty singly-linked list segments with head \(x_1\) and tail \(x_2\). Similarly, the predicates \(\mathtt {odd}(x_1,x_2)\) and \(\mathtt {even}(x_1,x_2)\) restrict such list segments to odd and even length, respectively. In the remainder of this and the next section, we will use our abstraction to show that the entailment \(\mathtt {sll}(x_1,x_2) \models _{{\varPhi }_{\text {lists}}}\mathtt {odd}(x_1,x_2)\) does not hold.

4.1 Context Profiles as an Abstract Domain

Refinement property. We propose profiles as a suitable abstraction for deciding entailments. We will argue that they comply with the four essential correctness properties discussed in Sect. 1: refinement, finiteness, compositionality, and effectiveness. Refinement means that two concrete heap graphs with the same profiles entail the same SID predicates. Hence, for each profile and predicate \(\mathsf {pred}\), it suffices to find a single model of \(\mathsf {pred}\) with that profile. Formally,

Throughout this paper, we do not distinguish between isomorphic contexts, context decompositions, or profiles.

is finite up to profile isomorphism.

5 An Effective Decision Procedure for Entailment

Computing profiles. By Theorem 3, to decide whether \(\mathsf {pred}_1(\mathbf {x_1})\,\models _{{\varPhi }}\,\mathsf {pred}_2(\mathbf {x_2})\) holds, it suffices to compute the finite (by Lemma 3) set of all profiles of models of \(\mathsf {pred}_1(\mathbf {x_1})\). This is performed by the procedure \(\mathsf {abstractSID}({\varPhi })\) shown in Algorithm 1. To understand how the algorithm works, recall how predicates can be unrolled to compute a model: We select an SID rule and replace all of its predicate calls with previously computed models. By Lemma 1, this amounts to performing heap graph operations. That is, we first rename the free variables of previously computed models to match the parameters of predicate calls. After that, the resulting models and the single allocation (due to the progress condition) of the rule are composed into a single heap graph. Finally, we apply a forget operation to remove free variables that have been existentially quantified.

Algorithm 1 behaves analogously. However, instead of applying operations on heap graphs, it applies our abstract operations on profiles (cf. Theorem 2): We select an SID rule \(\mathsf {pred}~\Leftarrow ~\varphi \) in line 5. By Lemma 4, we can compute the profile of the single allocation in \(\varphi \). (l. 6). We then select previously computed profiles for the predicate rules and rename their free variables to match the parameters of the predicate calls in \(\varphi \) (l. 7–9). Finally, the selected profiles are composed and added to the computed profiles of predicate \(\mathsf {pred}\) (l. 10, 11). The algorithm then proceeds by computing profiles until a fixed point is reached (l. 12).

Correctness. Algorithm 1 is guaranteed to terminate due to the finiteness of our abstract domain (Lemma 3). Moreover, it computes the desired set of profiles:

To check entailments \(\mathsf {pred}_1(\mathbf {a})\,\models _{{\varPhi }}\,\mathsf {pred}_2(\mathbf {b})\), where \(\mathbf {a}\) and \(\mathbf {b}\) do not coincide with the free variables of \(\mathsf {pred}_1\) and \(\mathsf {pred}_2\) in the rules of \({\varPhi }\), it suffices to apply an additional rename operation. Hence, by combining Theorems 3 and 4, we obtain a constructive decidability proof for entailments between predicate calls. Moreover, a close inspection of the size of the set of profiles and the runtime of Algorithm 1 reveals that our decision procedure runs in time doubly exponential in the size of a given SID. A detailed analysis is found in [1, Sect. 7.4].

Generalizations. Several of our assumptions about SIDs and entailments have been made purely to simplify the presentation. In fact, Corollary 1 can be generalized to (1) decide entailments \(\varphi \,\models _{{\varPhi }}\,\psi \) for symbolic heaps \(\varphi , \psi \) (instead of predicate calls) and (2) SIDs with pure formulas. Both extensions are supported by our implementation. Further details are found in [1].

We implemented our decision procedure for entailment in the separation logic prover Harrsh [1, 15], which is written in Scala. Harrsh supports the full \(\text {SL}_{\text {btw}}\) fragment, including pure formulas, parameter repetitions, and entailments between symbolic heaps (as opposed to single predicate calls). Table 1 summarizes the results of our evaluation for a selection of entailments and SIDs. Our full collection of 101 benchmarks and all experimental results are available online [1].

Methodology. We compared Harrsh against Songbird [19], the winner of the SID entailment category of this year’s separation logic competition, SL-COMP’18; and against Slide [11], the tool that is most closely related to our approach but that is complete only for a subclass of \(\text {SL}_{\text {btw}}\). Experiments were conducted using the popular benchmarking harness jmh on an Intel® Core™ i7-7500U CPU running at 2.70 GHz with a memory limit of 4 GB. We report the average run times obtained by running Jmh on each benchmark for 100 s.
Table 1.

The performance of Harrsh (HRS), Songbird (SB) and Slide (SLD) on a variety of SIDs; and the size of the abstraction computed by Harrsh. The timeout (TO) was 180,000 ms. Termination before the timeout but without result is denoted (U). Wrong results/crashes are marked (X).

Results. Table 1 reveals that our decision procedure—being the first implemented decision procedure that is complete for the entire SL fragment \(\text {SL}_{\text {btw}}\)—is not only of theoretical interest, but can also solve challenging entailment problems efficiently in practice. While Slide was faster on some benchmarks that fall into the fragment defined in [11], as well as on some SIDs outside of that fragment, Harrsh was able to solve several benchmarks on which Slide failed. Two benchmarks led to errors: One wrong result and one program crash (the first and the second entries marked by (X) in Table 1, respectively). We are unsure whether the timeouts encountered on the TLL benchmarks are caused by a bug in Slide, as Slide is quite efficient on other TLL variants (see [11, Table 1]). Furthermore, note that Harrsh significantly outperformed Songbird, providing further evidence of the effectiveness of our profile-based abstraction.

We presented an alternative proof for decidability of entailment in separation logic with bounded tree width [10]. In contrast to the original proof, we give a direct model theoretic construction. We implemented the resulting decision procedure in the tool Harrsh and obtained promising experimental results. For future work, we plan to extend our approach to the bi-abduction problem.