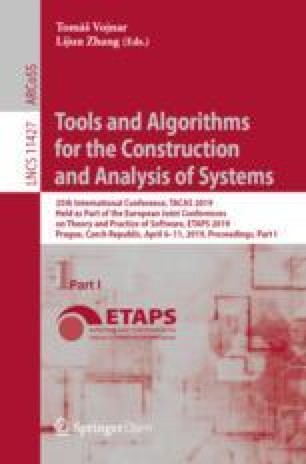 TACAS 2019: Tools and Algorithms for the Construction and Analysis of Systems pp 372-378 | Cite as

Symbolic regex matcher is a new open source .NET regular expression matching tool and match generator in the Microsoft Automata framework. It is based on the .NET regex parser in combination with a set based representation of character classes. The main feature of the tool is that the core matching algorithms are based on symbolic derivatives that support extended regular expression operations such as intersection and complement and also support a large set of commonly used features such as bounded loop quantifiers. The particularly useful features of the tool are that it supports full UTF16 encoded strings, the match generation is backtracking free, thread safe, and parallelizes with low overhead in multithreaded applications. We discuss the main design decisions behind the tool, explain the core algorithmic ideas and how the tool works, discuss some practical usage scenarios, and compare it to existing state of the art.

We present a new tool called Symbolic Regex Matcher or SRM for fast match generation from extended regular expressions. The development of SRM has been motivated by some concrete industrial use cases and should meet the following expectations. Regarding performance, the overall algorithm complexity of match generation should be linear in the length of the input string. Regarding expressivity, it should handle common types of .NET regexes, including support for bounded quantifiers and Unicode categories; while nonregular features of regexes, such as back-references, are not required. Regarding semantics, the tool should be .NET compliant regarding strings and regexes, and the main type of match generation is: earliest eager nonoverlapping matches in the input string. Moreover, the tool should be safe to use in distributed and multi threaded development environments. Compilation time should be reasonable but it is not a critical factor because the intent is that the regexes are used frequently but updated infrequently. A concrete application of SRM is in an internal tool at Microsoft that scans for credentials and other sensitive content in cloud service software, where the search patterns are stated in form of individual regexes or in certain scenarios as intersections of regexes.

The built-in .NET regex engine uses a backtracking based match search algorithm and does not meet the above expectations; in particular, some patterns may cause exponential search time. While SRM uses the same parser as the .NET regex engine, its back-end is a new engine that is built on the notion of derivatives [1], is developed as a tool in the open source Microsoft Automata framework [5], the framework was originally introduced in [8]. SRM meets all of the above expectations. Derivatives of regular expressions have been studied before in the context of matching of regular expressions, but only in the functional programming world [2, 6] and in related domains [7]. Compared to earlier derivative based matching engines, the new contribution of SRM is that it supports match generation not only match detection, it supports extended features, such as bounded quantifiers, Unicode categories, and case insensitivity, it is .NET compliant, and is implemented in an imperative language. As far as we are aware of, SRM is the first tool that supports derivative based match generation for extended regular expressions. In our evaluation SRM shows significant performance improvements over .NET, with more predictable performance than RE2 [3], a state of the art automata based regex matcher.

In order to use SRM in a .NET application instead of the built-in match generator, Open image in new window

can be built from [5] on a .NET platform version 4.0 or higher. The library extends the built-in Open image in new window

class with methods that expose SRM, in particular through the Open image in new window

Here we work with derivatives of symbolic extended regular expressions or regexes for short. Symbolic means that the basic building blocks of single character regexes are predicates as opposed to singleton characters. In the case of standard .NET regexes, these are called character classes, such as the class of digits or Open image in new window

. In general, such predicates are drawn from a given effective Boolean algebra and are here denoted generally by \(\alpha \) and \(\beta \); Open image in new window

denotes the false predicate and Open image in new window

the true predicate. For example, in .NET Open image in new window

Match Generation. The main purpose of the tool is to generate matches. While match generation is a topic that has been studied extensively for classical regular expressions, we are not aware of efforts that have considered the use of derivatives and extended regular expressions in this context, while staying backtracking free in order to guarantee linear complexity in terms of the length of the input. Our matcher implements by default nonoverlapping earliest eager match semantics. An important property in the matcher is that the above set of regular expressions is closed under reversal. The reversal of regex R is denoted \(R^{\mathbf {r}}\). Observe that:
Open image in new window

Observe that step 4 guarantees longest match in R from the position \(i_{\text {start}}\) found in step 3 for the earliest match found in step 2. In order for the above procedure to be practical there are several optimizations that are required. We discuss some of the implementation aspects next.

SRM is implemented in Open image in new window

. The input to the tool is a .NET regex (or an array of regexes) that is compiled into a serializable object R that implements the main matching interface IMatcher. Initially, this process uses a Binary Decision Diagram (BDD) based representation of predicates in order to efficiently canonicalize various conditions such as case insensitivity and Unicode categories. The use of BDDs as character predicates is explained in [4]. Then all the BDDs that occur in R are collected and their minterms (satisfiable Boolean combinations) are calculated, called the atoms \((\alpha _1,\ldots ,\alpha _k)\) of R, where \(\{{[\![\alpha _i]\!]_{\texttt {BDD}}}\}_{i=1}^k\) forms a partition of \(\varSigma \). Each BDD-predicate \(\alpha \) in R is now translated into a k-bit bit-vector (or BV) value \(\beta \) whose i’th bit is 1 iff \(\alpha \wedge _{\texttt {BDD}}\alpha _i\) is nonempty. Typically k is small (often \(k\le 64\)) and allows BV to be implemented very efficiently (often by ulong), where \(\wedge _{\texttt {BV}}\) is bit-wise-and. All subsequent Boolean operations are performed on this more efficient and thread safe data type. The additional step required during input processing is that each concrete input character c (char value) is now first mapped into an atom id i that determines the bit position in the BV predicate. In other words, \(c\in [\![\beta ]\!]_{\texttt {BV}}\) is implemented by finding the index i such that \(c\in [\![\alpha _i]\!]_{\texttt {BDD}}\) and testing if the i’th bit of \(\beta \) is 1, where the former search is hardcoded into a precomputed lookup table or decision tree.

. Then R has three atoms: Open image in new window

, since Open image in new window

Finally, two more key optimizations are worth mentioning. First, during the main match generation loop, symbolic regex nodes are internalized into integer state ids and a DFA is maintained in form of an integer array \(\delta \) indexed by [i, q] where \(1\le i \le k\) is an atom index, and q is a state integer id, such that old state ids are immediately looked up as \(\delta [i,q]\) and not rederived. Second, during step 2, initial search for the relevant initial prefix, when applicable, is performed using string.IndexOf to completely avoid the trivial initial state transition corresponding to the loop Open image in new window

in the case when Open image in new window

We have evaluated the performance of SRM on two benchmarks:

We compare the performance of our matcher against the built-in .NET regex engine and Google’s RE2 [3], a state of the art backtracking free regex match generation engine. RE2 is written in Open image in new window

and internally based on automata. It eliminates bounded quantifiers in a preprocessing step by unwinding them, which may cause the regex to be rejected if the unwinding exceeds a certain limit. RE2 does not support extended operations over regexes such as intersection or complement. We use RE2 through a Open image in new window

The input to the built-in .NET regex engine and SRM is in UTF16, which is the encoding for NET’s built-in strings, while RE2 is called with UTF8 encoded input. This implies for example that a regex such as Open image in new window

that tries to locate a single UTF16 surrogate is not meaningful in the context UTF8. All experiments were run on a machine with dual Intel Xeon E5-2620v3 CPUs running Windows 10 with .NET Framework 4.7.1. The reported running times for Twain are averages of 10 samples, while the statistics for Assorted are based on a single sample for each regex.

Figure 1 presents running times for each regex in Twain, while Fig. 2 presents a selection of metrics for the Assorted benchmark.

Both SRM and RE2 are faster than .NET on most regexes. This highlights the advantages of automata based regular expression matching when the richer features of a backtracking matcher are not required.

Compilation of regular expressions into matcher objects takes more time in SRM than RE2 or .NET. The largest contributor to this is finding the minterms of all predicates in the regex. For use cases where initialization time is critical and inputs are known in advance, SRM provides support for pre-compilation and fast deserialization of matchers.

Comparing SRM to RE2 we can see that both matchers have regexes they do better on. While SRM achieves a lower average matching time on Assorted, this is due to the more severe outliers in RE2’s performance profile, as shown by the lower 80th percentile matching time. Overall SRM offers performance that is comparable to RE2 while being implemented in Open image in new window

without any unsafe code.

Application to Security Leak Scanning. SRM has been adopted in an internal tool at Microsoft that scans for credentials and other sensitive content in cloud service software. With the built-in .NET regex engine the tool was susceptible to catastrophic backtracking on files with long lines, such as minified JavaScript and SQL server seeding files. SRM’s linear matching complexity has helped address these issues, while maintaining compatibility for the large set of .NET regexes used in the application.