Disparity and Discrimination in Labour Market Outcomes in India 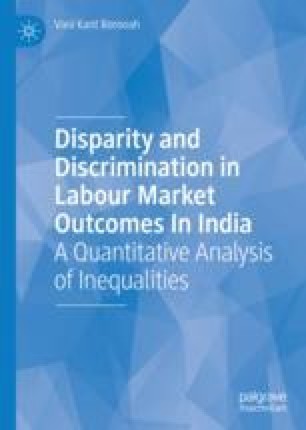 In this chapter, Borooah considers the distribution of job contracts—in terms of casual jobs, temporary jobs (i.e. those of less than a year’s duration), and permanent jobs—across different subgroups of the population. Although the analysis of this chapter echoes that of Chap.  3, which is cast in terms of regular salaried and wage employment and casual employment, the novelty of this chapter is twofold. First, it explicitly addresses the question of job tenure: while much of the regular salaried and wage employment discussed in Chap.  3 may have been permanent employment, some of it may not have been. Second, and more importantly, it addresses the issue of “desirable jobs” using a data set different from the National Sample Survey data used in the earlier chapter (i.e. unit record data from the Indian Human Development Survey relating to the period 2011–12). The Survey provides details about the job tenure of persons by distinguishing between three types of jobs: casual (daily or piecework), contracts of less than one-year duration, and permanent. The importance of the analysis contained in this chapter is that if one defines job insecurity as workers’ fear of involuntary job loss, job insecurity has negative consequences for employees’ attitudes towards their job, their health, and the quality of their relationship with their employers.

Appendix on Measures of Disproportionality

One of the issues central to this chapter is the degree to which permanent jobs were concentrated among certain social groups. In analysing this, this chapter made use of the Bourguignon-Theil index based on the natural logarithm of the arithmetic to the geometric mean (Theil 1967; Bourguignon 1979). Other methods for measuring disproportionality also exist.