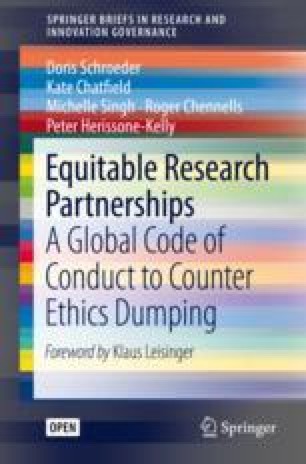 The world’s largest collection of professional ethics codes already holds more than 2,500 codes. What can the Global Code of Conduct for Research in Resource-Poor Settings (GCC) add? This brief chapter gives co-authors and supporters of the GCC the opportunity to show why a code with the single-minded aim of eradicating ethics dumping is needed.

The world’s largest collection of professional ethics codes holds more than 2,500 codes (IIT nd). Is another ethics code really needed? The evidence gathered on the 21st-century export of unethical research practices from high-income to lower-income settings says it is (Schroeder et al. 2018). Such ethics dumping still occurs despite a proliferation of ethics codes. This could be for either of two main possible reasons. First, an ethics code designed to guard against ethics dumping is not yet available. Second, ethics codes are not suitable for guarding against ethics dumping. We would agree with the first, but not the second.

Instead of summarizing the book, this chapter concludes by giving the floor to co-authors and supporters of the Global Code of Conduct for Research in Resource-Poor Settings (GCC) and the San Code of Research Ethics . Their statements provide further evidence that both codes are truly needed and that they will make a difference in the campaign against ethics dumping.1

We found that many research stakeholders expressed a need for a simpler, more intuitive and fairer framework to guide research practice. – Professor Carel IJsselmuiden (South African), executive director of the COHRED Group, co-author of the GCC

The San Code of Research Ethics is the voice of a community that have been exploited for so many years. The San community will ensure that this document will remain relevant for generations to come. – Leana Snyders (South African), director of the South African San Institute, co-author of both codes

We want to know whether our global project is going well – ethically. The GCC provides a short and accessible checklist to prompt reflection on our stroke care research in hospitals in India. – Professor Dame Caroline Watkins (British), leader of the Improvise Project, first individual project adopter of the GGC

The GCC is a good guide for Indian ethics committees and the Health Ministry’s Screening Committee to review Indo-EU collaborative studies, including those by Indian researchers with EU researchers. – Dr Nandini Kumar (Indian), vice president of the Forum for Ethics Review Committees in India , co-author of the GCC

The four values of the GCC at last answer the perpetual question that has nagged people who care about acting ethically: how do you make individuals act ethically in a world where there are too many codes, and ethics dumping still happens? Inspire them! The four global values of fairness, respect, care and honesty inspire individuals in any context to act ethically. – Professor Pamela Andanda (Kenyan), professor of law at the University of the Witwatersrand, South Africa , co-author of the GCC

The inclusion in the GCC of elements relating to agricultural and environmental ethics is long overdue. It is time that fairness, respect, care and honesty were considered more systematically in agriculture. – Associate Professor Rachel Wynberg (South African), South African Bio-economy Research Chair, co-author of the GCC

I have had a very close look at the Global Code of Conduct that you have proposed, and I really find it impressive (Burtscher 2018). – Wolfgang Burtscher (Austrian), deputy director-general of Research and Innovation for the European Commission

Unlike other codes, the GCC has built into it community engagement and meaningful involvement of research participants as part of a checklist for designing good studies. – Dr Joshua Kimani (Kenyan), clinical research director at Partners for Health and Development in Africa , University of Manitoba field office in Kenya , co-author of the GCC

Many of my company’s clients are not ethicists, but they want to undertake their research ethically. The GCC avoids ethics jargon and is concise and clear. – Elena Tavlaki (Greek), director of Signosis Sprl, co-author of the GCC

Good practices know no regional or political boundaries: research that is unethical in Europe is unethical in Africa. That’s why the GCC is needed. – Dr Michael Makanga (Ugandan), executive director of the European & Developing Countries Clinical Trials Partnership, co-author of the GCC

The world is unfair. We are talking about R&D in an unfair world ... The Code of Conduct [GCC] is exquisitely clear that it is unethical to do research in one place for the sake of another. (TRUST 2018 ) – Professor Jeffrey Sachs (American), speaking at the GCC launch in the European Parliament

The new four-values system around fairness, respect, care and honesty is highly appreciated in Asia. People find it intuitive – in fact, most audiences loved it. – Dr Vasantha Muthuswamy (Indian), president of the Forum for Ethics Review Committees in India , co-author of the GCC

Zhai Xiaomei [Chinese], the executive director of the Centre for Bioethics at the Chinese Academy of Medical Sciences, in Beijing, who is also deputy director of the health ministry’s ethics committee, welcomes what TRUST2 has done. (Economist 2018)

To deliver our mission to end world hunger, we need to undertake research. Applying the GCC will assist us greatly. No previous code was designed so clearly for work with highly vulnerable populations in resource-poor settings. – Myriam Ait Aissa (French), head of Research and Analysis at Action contre la Faim, co-author of the GCC

Fairness, respect, care and honesty: four simple words with clear meaning to help researchers enter the house through the door and no longer through the window.3 – Dr François Hirsch (French), former head of the Inserm (French National Institute of Health and Medical Research ) Office for Ethics, co-author of the GCC

Ron Iphofen [British], an adviser on research ethics to the European Commission , believes the code will have a profound impact on how funding proposals to the EU are designed and reviewed. “I could envisage reviewers [of EU-funded research proposals] now looking suspiciously at any application for funds that entailed research by wealthy nations on the less wealthy that did not mention the code,” he says. (Nordling 2018)

The emphasis in the GCC on fairness, respect, care and honesty resonates with our work at UNESCO. – Dr Dafna Feinholz (Mexican), UNESCO’s chief of Bioethics and Ethics of Science and Technology, co-author of the GCC

TRUST was a game changer.4

Ethics dumping is a real threat to the quality of science and the GCC is now a mandatory reference document for EU framework program funding to guard against it. – Dorian Karatzas (Greek), head of Ethics and Research Integrity , European Commission

Best science for the most neglected, also means best ethical standards. That’s why the GCC aims high: to protect the most neglected. – Dr François Bompart (French), director of Paediatric HIV/Hepatitis C Programmes at the Drugs for Neglected Diseases initiative (DNDi), former vice president, Access to Medicines at Sanofi, co-author of the GCC

We get given consent forms and documents, often in a hurry. We sign because we need the money and then end up with regret. It feels like a form of abuse. They want something from us and they know how to get it. Because of our socio-economic conditions, we will always be vulnerable to those from the North. A code of ethics is needed that protects indigenous people.5 – Andries Steenkamp (1960–2016) (South African), former chair of the South African San Council , co-author of both codes

I don’t want researchers to see us as museums who cannot speak for themselves and who don’t expect something in return. As humans, we need support.6 – Reverend Mario Mahongo (1952–2018) (Angolan), co-author of both codes

We want to be treated by researchers with fairness, respect, care and honesty. Is that too much to ask?7 – Joyce Adhiambo Odhiambo (Kenyan), health activist and former sex worker , co-author of the GCC

Indeed, is that too much to ask?