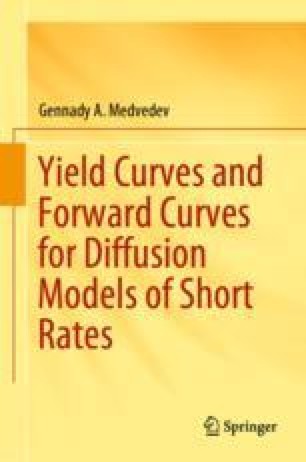 The investigation of the affine term structure of interest rates started in Chap.  3 continues with the use of yield curves and forward curves in the case when the Cox–Ingersoll–Ross model is used. Not only single-factor, but multifactor models are analyzed. The yield curves and forward curves use the duration of the risk-free rate as a temporary variable. A numerical comparison of the results based on the Vasiček and Cox–Ingersoll–Ross models is carried out. The Longstaff–Schwartz model is considered both in the space of latent transient states and in the space of observable (or estimated) state variables. Analytical expressions for yield curves to maturity and forward curves are obtained in both cases. An extension of the model to an arbitrary dimension of the state space is proposed. Within the framework of this extension, a method is proposed for obtaining analytical solutions of equations with respect to the functions of the term structure of interest rates, when the initial equations for the dynamics of the short-term interest rate lead to non-linear systems of Riccati equations with respect to these functions, which do not allow an analytical solution to be obtained by known methods. This method is based on the obvious assertion that if the process of a short-term interest rate is specified, then the corresponding term structure of yield does not depend on how the space of variables of the state of the financial market is described. A numerical example is given.