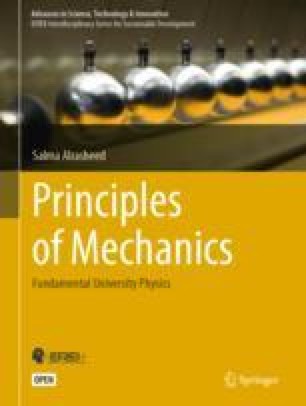 7.2 The Plane Motion of a Rigid Body

When all parts of a rigid body move parallel to a fixed plane, then the motion of the object is referred to as plane motion. There are two types of plane motion, which are given as follows:

Find the angular speed of the moon in its orbit about the earth in rev/day.

7.7 Angular Momentum of a Rigid Body Rotating about a Fixed Axis

A 5 kg wheel of radius of 0.1 \(\mathrm {m}\) decelerates from an angular speed of 5 \(\mathrm {r}\mathrm {a}\mathrm {d}/\mathrm {s}\) to rest after going through an angular displacement of 10 rev If a frictional force causes the wheel to decelerate, find the torque due to this force.

Fig. 7.16 shows a uniform thin rod of mass M and length L. Find the moment of inertia of the rod about an axis that is perpendicular to it and passing through: (a) the center of mass; (b) at one end; (c) at a distance of L / 6 from one end.

Fig. 7.17 shows a uniform thin plate of mass M and surface density \(\sigma \). Find the moment of inertia of the plate about an axis passing through its center of mass if its length is b and its width is a (the \(\mathrm {z}\)-axis).

Find the moment of inertia of a uniform solid cylinder of radius R, length L and mass M about its axis of symmetry.

Three rods of length L and mass M are connected together as in Fig. 7.19. Determine the moment of inertia of the system about an axis passing through \(\mathrm {O}\) and perpendicular to the page (the rods lie in the same plane).

Find the moment of inertia of a spherical shell of radius R and mass M about an axis passing through its center of mass.

7.8 Conservation of Angular Momentum of a Rigid Body Rotating About a Fixed Axis

The instantaneous power delivered to rotate an object about a fixed axis is found from
$$ P=\frac{dW}{dt}=\frac{\tau _{z}d\theta }{dt}=\tau _{z}\omega _{z} $$
Table. 7.2 shows analogous equations in linear motion and rotational motion about a fixed axis

A disc of radius \(R=0.08 \; \mathrm {m}\) and mass of 5 kg is rotating about its central axis with an angular speed of 170 rev/min. Find: (a) the rotational kinetic energy of the disc; (b) Suppose that the same disc rotate using a motor that delivers an instantaneous of power 0. \(2\mathrm {h}\mathrm {p}\), find in that case the torque applied to the disc.

Consider a light rope wrapped around a uniform cylindrical shell of mass 30 kg and radius of 0.2 \(\mathrm {m}\) as in Fig. 7.22. Suppose that the cylinder is free to rotate about its central axis and that the rope is pulled from rest with a constant force of magnitude of 35 N. Assuming that the rope does not slip, find: (a) the torque applied to the cylinder about its central axis; (b) the angular acceleration of the cylinder; (c) the acceleration of a point in the unwinding rope; (d) the number of revolutions made by the cylinder when it reaches an angular velocity of 12 \(\mathrm {r}\mathrm {a}\mathrm {d}/\mathrm {s}, (\mathrm {e})\) the work done by the applied force when the rope is pulled a distance of \(1\mathrm {m}, (\mathrm {f})\) the work done using the work–energy theorem.

A uniform rod of mass \(M=0.75\) kg and length \(L=1\mathrm {m}\) is hinged at one end and is free to rotate in a vertical plane as in Fig. 7.23. If the rod is released from rest at an angle \(\theta =30^{\mathrm {o}}\) to the horizontal, find; (a) the initial angular acceleration of the rod when it is released; (b) the initial acceleration of a point at the end of the rod; (c) from conservation of energy find the angular speed of the rod at its lowest position (Neglect friction at the pivot).

A block of mass m is attached to a light string that is wrapped around the rim of a uniform solid disc of radius R and mass M as in Fig. 7.25. Assuming that the string does not slip and that the disc rotates without friction, find: (a) the acceleration of the block; (b) the angular acceleration of the disc, and; (c) the tension in the string when the system is released from rest.

A homogeneous solid sphere of mass 4.7 kg and radius of 0.05 \(\mathrm {m}\) rotate from rest about its central axis with a constant angular acceleration of 3 \(\mathrm {r}\mathrm {a}\mathrm {d}/\mathrm {s}^{2}\). Find: (a) the torque that produces this angular acceleration; (b) the work done on the sphere after 7 revolutions; (c) the work done after 7 revolutions using the work–energy theorem.

In Example 7.8 find the angular momentum in each case.

A uniform disc of moment of inertia of 0.1 kg m\(^{2}\) is rotating without friction with an angular speed of 3 \(\mathrm {r}\mathrm {a}\mathrm {d}/\mathrm {s}\) about an axle passing through its center of mass as in Fig. 7.29. When another disc of moment of inertia of 0.05 kg m\(^{2}\) that is initially at rest is dropped on the first, the two will eventually rotate with the same angular speed due to friction between them. Determine (a) the final angular speed; (b) the change in the kinetic energy of the system.