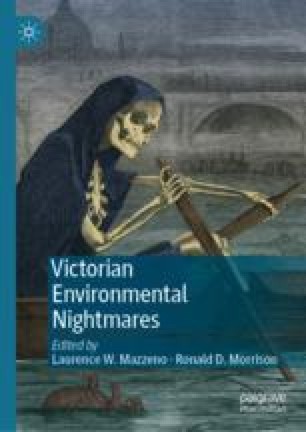 This chapter offers a concise introduction to Victorian Environmental Nightmares and presents a critical context for the volume. We conceived this collection as a continuation of and supplement to our previous collections, Victorian Writers and the Environment: Ecocritical Perspectives (Routledge, 2017) and Animals in Victorian literature and Culture: Contexts for Criticism (Palgrave, 2017). Although ecocriticism and animal studies have evolved into distinct enterprises that have had a complicated and sometimes antagonistic relationship in the past, we consider these critical orientations closely linked, and essays in the new collection frequently turn to the literary representations of nonhuman animals. As we completed the two earlier collections, we were struck by the ways in which Victorian literary responses to environmental change often moved beyond realistic depictions of natural disasters, air and water pollution, or the unchecked growth of urban environments (among other examples). As the new collection demonstrates, writers focusing on Victorian environments might include depictions of such events and activities in realistic fiction or polemical poetry, but environmental nightmares—both real and imaged—often strained the limits of traditional genre and canonical categories. Thus, the essays in the current volume often employ genre categories that are considered less significant or problematic, such as children’s literature, travel literature, science fiction, and fairy tales. Moreover, the volume includes work on literary figures not typically associated with ecocriticism (including Frances Trollope, Elizabeth Barrett Browning, Ouida, and Oscar Wilde, among others). In addition, “environmental nightmares” are not only restricted to depictions of British environments but also include depictions of environments in the Americas and in Australia as well. Thus, we have chosen a simple but effective organizing scheme for the volume, placing essays into the categories “At Home,” “Abroad,” and “Imagined Landscapes.” In selecting essays for the volume, we attempted to address some basic oversimplifications and exclusions of ecocriticism as articulated by Jesse Oak Taylor in a 2015 review essay. We have commissioned essays that avoid “the celebration of a de-historicized ‘Nature,’ idealizing wilderness rather than engaging with urban environments, uncritical and often largely metaphorical absorption of scientific terminology, inadequate attention to race and empire, and … a fixation on essences and abstractions rather than the dimensions of scale.” The essays in this new collection consistently address the very categories and topics that Taylor asserts have frequently been missing from a sophisticated version of Victorian ecocriticism. The Introduction also includes a brief overview of several recent collections of essays on Victorian literature from an ecocritical perspective. The Introduction concludes with a concise overview of the twelve essays that make up the collection.