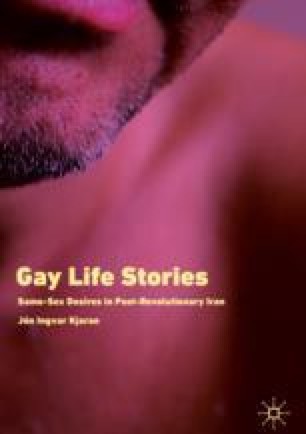 The chapter provides empirical insights into how gay/queer Iranian men navigate their lives between different spaces—social, virtual, and physical—in order to accommodate their gay identity and sexual desires within the legal-social and Islamic context of modern Iran. By employing Foucauldian analytic frameworks that attend to questions of heterotopic spatiality, and in conjunction with Massey’s notion of power geometries and how space is produced, it illuminates the complexity of queer Iranian men’s spatio-temporal modes of sociality in relation to sexual practices and being gay/queer. It also draws attention to how spaces can be transformed, claimed, and even queered within the limits set by the dominant discourse on gender and sexuality.

In this chapter, I employ the term “queer” along with the identity label “gay,” as those spaces discussed here were frequented not only by those who identify as gay but also by bisexual men, men who have sex with men, lesbians, transgender, and gender-queers, and individuals who do not ascribe to any identity category. Sometimes the term “queer man” is used to indicate non-heterosexuality in general. Using queer is also aligned to my epistemological positioning, emphasizing instability of any identity category, as well as how being and acting in a queer way can transgress the dominant norms and discourses. In that respect, I use the verb “queering” with the meaning of transgressing or showing resistance to the dominant norms/discourses.