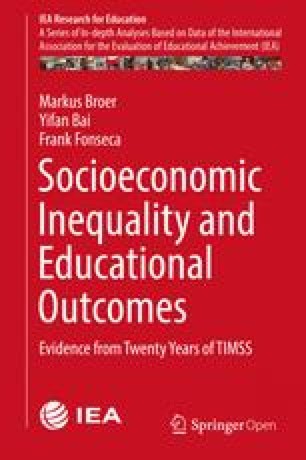 International large-scale assessments may be used to understand differences in average student performance across countries over time. Differences in achievement are associated with students’ background characteristics and, while the most salient background variables may differ across education systems, a substantial amount of the variance in student achievement is normally explained by family socioeconomic status (SES). Family SES is thus considered an important factor in education research, but there are still challenges regarding how to best measure SES operationally. In addition to measuring student achievement, the IEA’s Trends in International Mathematics and Science Study (TIMSS) has been collecting background information from students, their teachers, and principals at four-year intervals since 1995. This study uses data from the IEA’s TIMSS grade eight mathematics and science assessments to examine changes in the achievement gaps between high- and low-SES students between 1995 and 2015 for 13 education systems, as operationalized by a modified version of the TIMSS home educational resources index. The performance of disadvantaged students may also be tracked over time. These measures explain a sizeable amount of variation in the TIMSS achievement scores and, in conjunction with data on the countries’ education systems and other macroeconomic indicators, can provide country-specific analyses and an across-country synthesis.

Educational inequality is a central theme in education research due to its strong association with the attainment of educational qualifications and social positions in a society, which more importantly mirrors inequality in a society (Breen and Jonsson 2005). Ferreira and Gignoux (2011) described the difference between two types of inequality (as well as methods for measuring them): (1) inequality of outcomes, which can be expressed simply as the degree of variability in the outcome measure, and (2) inequality in opportunity, which can be described as the degree to which family background and other pre-determined personal characteristics determine a person’s educational outcomes (including, for example, differential access to better resourced schools). Our study focuses on the second type of inequality, and specifically on the degree to which family socioeconomic status (SES) is related to educational outcomes as measured in the Trends in International Mathematics and Science Study (TIMSS). When we write about inequality or educational inequality further on in the report, especially in the results section, it should be interpreted as “educational inequality in opportunity due to SES.” Researchers have made substantial contributions to the understanding of how SES relates to student performance (Lee and Burkam 2002). Sociological theories have been proposed and tested regarding how economic, social, and cultural capital in the family of origin can help transmit advantages from one generation to the next (Bourdieu 1986; Coleman 1988, 1990; Lareau 2011).

Over the last few decades, the emergence of international comparative assessment has provided an opportunity for researchers and policymakers to not only track student performance within their own education system but also to compare their system’s performance with that of other participating education systems. Prior to this, researching the inequality of educational outcomes depended on using different data sets from the various education systems to make comparisons across societies (Shavit and Blossfeld 1993). However, student performance results from international comparative assessments, such as IEA’s TIMSS and Progress in International Reading Literacy Study (PIRLS), and the Program for International Student Assessment (PISA) run by the Organisation for Economic Cooperation and Developemt (OECD), are followed today not only by researchers and policymakers but also by an informed public that is increasingly interested in how the results of these assessments may be used to understand how well each education system educates its students. For example, in many countries, the mainstream media has been closely following the international assessment results and making comparisons between students in their own country with their international counterparts (Coughlan 2016; Strauss 2017). As another example, the success of students in Asian educational systems is attributed by many media outlets to their coherent approach and having a culture devoted to education (Coughlan 2016).

In addition to tracking and trying to understand international differences in average student performance as they evolve over time, public debate also centers on the dispersion in achievement and the impact of social background on educational achievement within each education system. For instance, grade eight students in the United States have significantly improved their mathematics achievement over the past 20 years according to results from TIMSS. However, in the United States, the gaps between students at the high- and low-ends of the achievement distribution have widened over time (Sparks 2016).

Ideally, any achievement gaps between students should reflect only differences in their abilities or efforts. However, in most education systems, strong achievement differences exist that are associated with students’ background characteristics, such as race/ethnicity, gender, rural/urban residence status, or immigration/migration status. Depending on a society’s historic and social context, the most salient background variables may differ across education systems. Yet one background variable explaining a significant amount of variance in students’ achievement scores is common among countries, namely SES background, making this one of the most critical variables in education research.

While the association between SES and students’ academic achievement has been well documented in the literature, research on how such associations have become stronger or weaker over time in individual education systems is limited. Most national education policies include an aim to narrow the SES achievement gap and to improve performance among disadvantaged students. However, quantifiable measures of these efforts are still lacking, especially those that are straightforward and easy to understand.

TIMSS has assessed student academic performance and collected various kinds of background information from students, their teachers, and principals at four-year intervals since 1995. TIMSS data sets spanning two decades allow for the exploration of many interesting research questions, but, in this report, we will focus on two research questions concerning the changes over time in SES achievement gaps and in the performance of disadvantaged students, within and between education systems. For both, we identified potential indicators within the TIMSS data sets.

To address our research questions, we pooled the data for all cycles of the TIMSS grade eight mathematics and science assessments and examined the described trend measures for the education systems that had at least three data points over the 20 years of TIMSS (education systems that had participated in 1995, 2015, and in at least one intermediate cycle). We identified 13 educational systems that satisfied this criterion, namely Australia, Hong Kong, Hungary, Islamic Republic of Iran, Lithuania, New Zealand, Norway, Republic of Korea, Russian Federation, Singapore, Slovenia, Sweden, and the United States.

Over time, a consensus has been reached that SES is comprised of (at a minimum) parental education, family income, and parents’ occupation (or occupational prestige) since these three indicators reflect different aspects of family background (Brese and Mirazchiyski 2013). Among empirical studies, however, there are still challenges on how to best operationally measure SES (Buchmann 2002). This is especially true for large-scale assessments, where collection of all three components from objective sources is simply not feasible due to privacy concerns and funding constraints. In addition, there are concerns about information accuracy, especially when students are asked about family income and parental occupation. Most large-scale assessments thus ask students to report only on their parents’ education levels (and even that is normally not done for students below lower secondary school age). Parental education, conceptually, plays a key role among the three SES components, as educational attainment, to some extent, functions as a gatekeeper for obtaining certain types of occupations that carry higher occupational prestige and are associated with higher income.

These practical considerations therefore leave some room for researchers to decide what additional proxy variables to use as SES measures. Yang (2003) confirmed in their study that possession of a set of household items may be used as an SES indicator. Another potential indicator is “number of books at home,” and unpublished research by Ogut et al. (2016)1 has suggested that this variable, as reported by students, is strongly related to the level of parental education reported by their parents. All in all, even with the variability and limitations of the measurement of SES, one important criterion to judge the effectiveness of an SES measure is the extent of its association with students’ performance (Broer et al. unpublished work 2017),2 as long as all the components of the SES measure are conceptually related to SES.

This study introduces a modified version of the TIMSS home educational resources (HER) index, which is comparable over the 20-year period of TIMSS data. We argue that the measure constructed for this study, referred to in this book as the SES* index3, is based on educationally relevant aspects of the SES construct, and that it is an effective measure, explaining a sizeable amount of variation in TIMSS achievement scores.

In the remainder of this book, we comprehensively review the existing literature on socioeconomic status and educational achievement, and, based on this and our own research, propose a robust new comparative socioeconomic index measure for the TIMSS data. We applied this new methodology to analyze TIMSS trend data to describe how socioeconomic achievement gaps have evolved over time for the studied education systems. Finally, we discuss these gaps from a macroeconomic perspective, and identify opportunities for future research. An appendix provides a sensitivity check of the results, better establishing the validity of our SES* index.

© International Association for the Evaluation of Educational Achievement (IEA) 2019

Open Access This chapter is licensed under the terms of the Creative Commons Attribution-NonCommercial 4.0 International License (http://creativecommons.org/licenses/by-nc/4.0/), which permits any noncommercial use, sharing, adaptation, distribution and reproduction in any medium or format, as long as you give appropriate credit to the original author(s) and the source, provide a link to the Creative Commons license and indicate if changes were made.