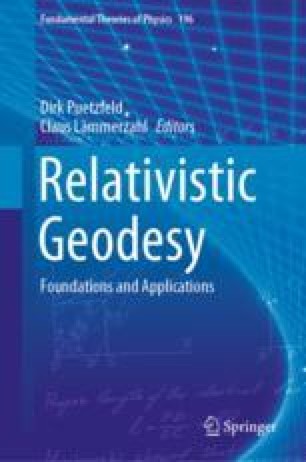 The motion of a compact body in space and time is commonly described by the world line of a point representing the instantaneous position of the body. In General Relativity such a world-line formalism is not quite straightforward because of the strict impossibility to accommodate point masses and rigid bodies. In many situations of practical interest it can still be made to work using an effective hamiltonian or energy-momentum tensor for a finite number of collective degrees of freedom of the compact object. Even so exact solutions of the equations of motion are often not available. In such cases families of world lines of compact bodies in curved space-times can be constructed by a perturbative procedure based on generalized geodesic deviation equations. Examples for simple test masses and for spinning test bodies are presented.

I am indebted to Richard Kerner, Roberto Collistete jr., Gideon Koekoek, Giuseppe d’Ambrosi, S. Satish Kumar and Jorinde van de Vis for pleasant and informative discussions and collaboration on various aspects of the topics discussed. This work is supported by the Foundation for Fundamental Research of Matter (FOM) in the Netherlands. 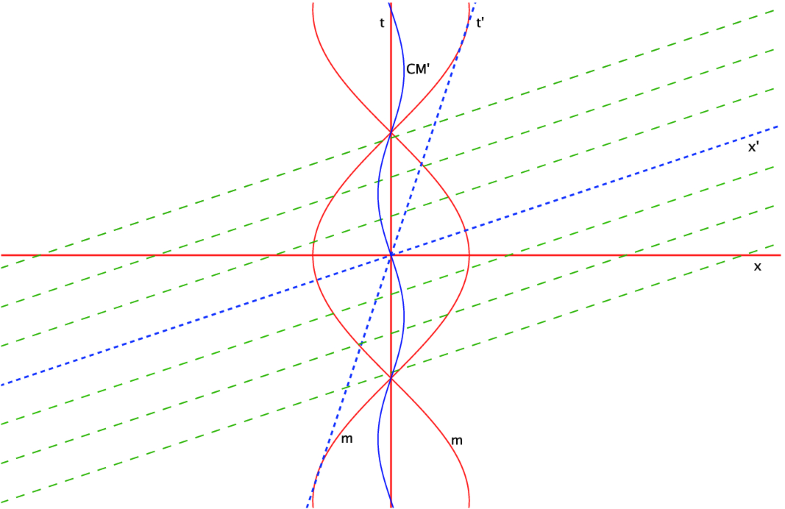 A Observer-Dependence of the Center of Mass in Relativity

To illustrate the observer-dependence of the center of mass of an extended body we consider a simple example: the motion of two equal test bodies revolving at constant angular velocity in Minkowski space on a circular orbit around an observer located in the origin of an inertial frame with cartesian co-ordinates (t, x, y, z). The plane of the orbit is taken to be the x-y-plane. In Fig. 3 we plot the projection of the world lines in the x-t-plane, represented by the two widely oscillating curves. At any moment the two test bodies are at equal distance to the observer and in opposite phase with respect to the origin. In this frame the center of mass is located at the origin \(x = 0\) and moves in a straight line along the t-axis in space-time.

A second observer in another inertial frame \((t',x',y',z')\) moving with constant velocity v in the positive x-direction has a different notion of simultaneity, as defined by the appropriate Lorentz transformation. The lines \(t' =\) constant are represented by the dashed slant lines parallel to the \(x'\)-axis. In the limit of large masses and slow rotation the center of mass CM\('\) with respect to this moving frame is located halfway between the masses at fixed time \(t'\). The world line of CM\('\) is now represented by the single curve oscillating at smaller amplitude around the line \(x = 0\) in the original frame. In fact for the observer in relative motion CM\('\) moves in the negative \(x'\)-direction while oscillating around the line \(x' = - vt'\).

It is obvious that in curved space-time the notion of simultaneity is further complicated because of the non-existence of global inertial frames, resulting in additional distortions of the world line CM\('\) with respect to the world line in the local inertial frame (t, x, y, z) fixed to the center of rotation.

B Coefficients for Geodesic Deviations in Schwarzschild Geometry

The coefficients for the deviations of bound equatorial orbits w.r.t. parent circular orbits have been calculated for Schwarzschild space-time up to second order; with the restriction \(\rho ^r_1 = \rho ^r_2 = 0\) explained in the main text one gets the following results [6]: