Differential Undercounts in the U.S. Census 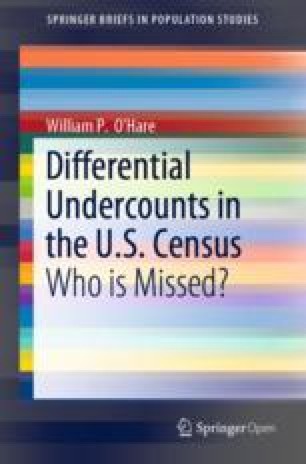 Differential Undercounts in the U.S. Census pp 51-62 | Cite as

People pass through different family situations and living arrangements as they age and many of these changes over a lifetime are related to changes in the likelihood of being missed in the Census. In this Chapter, some of the biggest differences in Census coverage by age are examined and some ideas about why people are missed or overcounted are explored. Young children age 0–4 had the highest net undercount rate and highest omissions rate of any age group in the 2010 Census. The college-age population (age 18–24) and elderly people (over age 60) had net overcounts.

The initial analysis in this Chapter relies heavily on Demographic Analysis (DA) estimates. I believe the strengths of DA methodology make it a particularly good technique for discussing Census coverage by age for at least four reasons. First, DA data on age is more detailed than that from Dual-Systems Estimates (DSE). Data are available by single year of age from DA but only for large age/sex groups from DSE. Second, DA estimates have been produced since 1950, so there is more historical data. Third, in the decade prior to the 2010 Census, staff at the Census Bureau investigated several issues related to the production of DA estimates (Robinson 2010; Bhaskar et al. 2010; Devine et al. 2010). The increased input, review, and examination enhance the reliability of the 2010 DA estimates. Fourth, DSE estimates for the youngest ages greatly underestimate the net undercount (O’Hare et al. 2016) so that data series cannot be used to examine the whole age spectrum.

Figure 5.1 shows net coverage in the 2010 Census by five-year age groups based on DA. Data in Fig. 5.1 indicate a high net undercount for young children, a high net overcount for people in their late teens and early twenties and a high net overcount for people over age 60. For other age groups the net coverage is close to zero (less than 1%). Therefore, I focus on three groups, age 0–4, 18–24 and 60 and older in the remainder of this Chapter.
Perhaps the most surprising finding shown in Fig. 5.1 is the high net undercount of young children. In the words of former Census Bureau Director Groves (2010, p. 1).

It’s often a surprise to many people when they learn that children tend to be undercounted in the US Censuses. Most can imagine various types of adults who fail to participate in Censuses, but don’t immediately think of children being missed.

Moreover, the survey research literature shows that households with children generally respond to surveys at higher rates than those without children (Groves and Couper 1998; Brick and Williams 2012). Groves and Couper (1998, p. 138) offer this succinct summary of the relationship between children in the household and cooperation in survey research, “Without exception, every study that has examined response or cooperation finds positive effects of the presence of children in the household.”

Consistent with much of the other literature on Census undercounts, among young children, racial and ethnic minorities had higher net undercounts. Based on the 2010 Census DA release, there was a net undercount of 6.3% for Black Alone or in Combination age 0–4 and 7.5% for Hispanics age 0–4 (O’Hare 2015). It should be noted that a couple of recent studies (King et al. 2018; Jensen et al. 2018) suggest that the net undercount of young children might not be quite as high as earlier estimates indicate but nonetheless is still higher than any other age group, by far. These new studies are more in the nature of experimental estimates rather than officials estimates.

The high net undercount of young children is not a new issue. Difficulty in enumerating young children accurately has been noted historically (Hacker 2013; Adams and Kasakoff 1991; U.S. Census Bureau 1944). More than 100 years ago, Young (1901, p. 21) stated, “Experience has shown that it is extremely difficult to ascertain the true number of children in any population by simple enumeration.” The passage below is from a Census Bureau report following the 1940 Census, (U.S. Census Bureau 1944, p. 32) “Underenumeration of children under 5 years old, particularly infants under one year old, has been uniformly observed in the United States Census and in the Censuses of England and Wales and of various countries of continental Europe.” The results of the 2010 U.S. Census suggest this situation has not changed much since then.

Any explanation of why young children have such a high net undercount must not only explain why young children are missed, but why they are missed as a much higher rate than older children or adults. In some prior analysis, all children age 0–17 have been grouped together. For example, in the 1990 DSE results (U.S. Census Bureau 2001) all children under age 18 were treated as one group. But children (age 0–17) are not homogenous with respect to the risk of being missed in the Census.

Hard-to-count characteristics of children by age

Recent research by Fernandez et al. (2018) shows that among children under age 5, the odds of being missed in the Census are higher for:

Fernandez and her colleagues found that, by and large, these factors hold for Non-Hispanic Whites, Hispanics, and Non-Hispanic Blacks.

Research by Fernandez et al. (2018) also shows that one of the factors that is most closely associated with young children being missed in the Census is whether they were counted in the self-response or Non-Response Followup phase of the Census. Based on logistic regression analysis, Fernandez et al. (2018) show that if young children are not included in the self-response phase of the Census, they are 74% more likely to be missed. This research suggests that the Census Bureau should enhance training among 2020 Census enumerators with respect to making sure all young children in a household are included on returned Census questionnaires. Recently the Census Bureau (2018) issued a short publication showing some of the main reasons young children are missed in the Census.

One group with a relatively high net overcount is the population age 15–24. The net overcount for age 15–19 was 2.0% and for those age 20–24 it was 1.3%. The overcount in this age group is typically attributed to young adults being counted in the home of their parents as well as another address such as a college dormitory or military barracks (Martin 2007). Figure 5.3 shows net undercounts for the population age 15–24 by single year of age and reveals that the net overcounts peaks around age 19 or 20, which is the age many young people are in college.
Figure 5.4 shows the percent of people attending college by single year of age from 16–24 based on data from the Census Bureau’s American Community Survey. Figure 5.4 shows college attendance peaking at age 19, 20, and 21, the exact same ages as the higher net overcounts. Note that the ACS question just asked about college attendance, it does not differentiate those who leave home to go to college from those who live at home and attend college.

The second age group that had a substantial Census net overcount is the population age 60 and over. The overcount for this group may be attributed to retirees with two (or more) homes and to a lesser extent older people in nursing homes or other long-term care facilities. Like young adults, some of these people are counted in more than one place. Williams (2012, p. 8) provides one example of a Census overcount, “A husband and wife, for example, might own a vacation home and fill out a questionnaire there as well as their usual residence.” The 2010 Census Coverage Followup operation, showed relatively large duplication errors for people in nursing homes (U.S. Census Bureau 2012, Table 24).

In an analysis following the 2000 Census, the Census Bureau focused on people who had been included in the Census more than once (U.S. Census Bureau 2002). In a key table, they show that people over age 50 are much more likely than younger groups to be duplicated in a different state, which suggests they were being counted in more than one home such as a winter home in Florida and a summer home in Michigan. This idea is bolstered by trends from 1950 to 2010 shown in Sect. 5.6.

Recall that the net Census undercount rate is a balance between people omitted and those included erroneously (mostly double counted) and whole-person imputations. The omissions rate captures the share of a group missed in the Census. DSE is the only method that shows omissions rates.

The omissions rates for the population age 0–9 published by the Census Bureau in 2012 are suspect because the DSE methodology only reflects a small portion of the net undercount of young children in the 2010 Census (O’Hare et al. 2016). DA estimated a net undercount of 4.6% for the population age 0–4 compared to only 0.7% for DSE. The difference is generally ascribed to correlation bias in the DSE methodology (O’Hare et al. 2016). Correlation bias refers to the fact that the kinds of people missed in the Census are also missed in the Post-Enumeration Survey.

Examination of net Census coverage rates from 1950 to 2010 indicates a significant and steady reduction in the net undercount in the total population. However, when the overall trend is decomposed by age, a more complex story emerged.

The net overcount of people age 60 and older has emerged over the past several decades. Figure 5.5 shows the net overcount for this age group was higher in 2010 than any other Census shown and the rates for the 2000 Census are not far behind those of 2010. On the other hand, the net undercount rates for those age 60 and older in 1950, 1960, and 1970, are relatively low compared to the past two Censuses. This supports the idea that the overcount of the older population may be related to increases in dual home ownership for this age group which increased over this time period.

Figure 5.5 also shows that the coverage of college-aged people has changed over time. In 1950, 1960 and 1970, there was a net undercount for age 15–19 and 20–24, but in the 2000 and 2010 Census, there was a net overcount in these age groups. This is consistent with larger number of people in the young adult age group leaving the home of their parents in recent decades.

The college age population (age 18–24) had a net overcount in the 2010 Census. The high net overcount is attributed to many young adults being counted at their parent’s home as well as another location such as college dormitory. This age group also had a relatively high omissions rate.

For the population age 60+, there was a relatively high net overcount in 2010. This is attributed to the fact that many people in this age group have two (or more) homes and are counted in both homes.