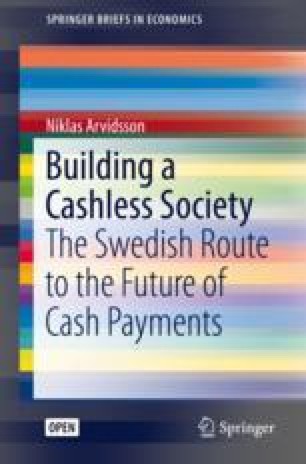 The development in Sweden has a long tradition from the middle of the twentieth century where actions and cooperation between critical actors have promoted electronic payment services. This has created a banking and payment system where the backbone is made of electronic bank accounts into which wages and salaries are paid which then serves as the base for all kinds of payments. The payment system is constituted on these accounts and payment services—cash, cards, invoices, Internet banking, mobile payments, and others—must connect to them. The inner “DNA” of the system is electronic.

The development in Sweden has a long tradition from the middle of the twentieth century where actions and cooperation between critical actors have promoted electronic payment services. This has created a banking and payment system where the backbone is made of electronic bank accounts into which wages and salaries are paid which then serves as the base for all kinds of payments. The payment system is constituted on these accounts and payment services—cash, cards, invoices, Internet banking, mobile payments, and others—must connect to them. The inner “DNA” of the system is electronic.

Today we see a strong substitution effect where mobile payment services—like Swish and iZettle—replace cash payments, which means that the use of cash is decreasing rapidly. The value of cash in circulation in Swedish crowns dropped 50% between the peak in 2007 and the low figures of 2018. This has led Sweden to become the country in the world with the lowest use of cash.1

There are of course many reasons behind this development, and this book has pointed at many. One important reason is that politicians during the last 20 years have left the development of payment services to the market, i.e., it is banks, card operators, payment receivers, payment service providers, telecom operators, automated clearing houses, payers, etc. that determine the development of the system. In the end it is the demand from consumers that set the limits to the use of cash, and they are seemingly more interested in using electronic services than cash. The laws and the system governing cash handling stimulate a reduction of cash.

If we turn our eyes to the future, me and my colleagues argue that Sweden may become a practically cashless society, but not before the year 2030. The actual use of cash, however, can start to become marginal much sooner than that. Sweden is currently in a “tipping point”—a situation where a slow decrease in use of cash has become a rapid decline—and it is likely that this development will continue albeit with a reduced pace. Another report we made led us to the conclusion that cash may become marginal in 2023 AD.

One critical factor behind the low use of cash in Sweden is that consumers put high trust in the Riksbank as well as the banking and payment system (including its actors) which in combination with a strong technology interest among Swedes has led to a willingness to use electronic payment services rather than cash. Cash is often seen as less convenient than, for instance, cards which are dominating the field of retail payments.

Yet another factor is of course demographics that speak in favor of mobile payment services to the detriment of cash. Younger people prefer electronic payments and are not getting raised with cash in the same sense as previous generations were. It may well be that the future of cash rests with the older generations. Several studies have shown that Swedish consumers in general are reducing their use of cash and this development is likely to continue partly because there is an evident demographic factor behind this pattern. Elderly have a higher tendency to use cash compared to other age groups, and people below 65 are not expected to start using cash to a higher extent just because they turn 65, which means that the use of cash is partly related to demographics. As elderly people using cash today will leave us, the use of cash will decrease.

Another factor is of course all the alternatives to cash that are likely to become more attractive for consumers and therefore become more competitive vis-à-vis cash. A move toward more e- and m-commerce will also speak in favor of more electronic payment services and less cash. Counterarguments, i.e., which may lead to a higher use of cash, include critical failures in the electronic and mobile systems, high fees for electronic and mobile services, a strengthened civil rights movement that convinces politicians and consumers to protect cash from a citizen and consumer perspective, and a general political ambition to keep cash. There are of course many other factors speaking in each direction, but these are some of the most important.

We have also seen that banks are reducing their supply of cash handling services. In 2016 more than half of the banks’ retail offices did not provide cash handling services (Länsstyrelserna, 2016). Previous studies also show that while banks may earn significant profits on electronic payment services as card payments, they do not earn much profits on cash-based services (Guiborg & Segendorf, 2007).

Our recent study on merchants’ view on cash (Arvidsson, Hedman, & Segendorf, 2018) provides a clear image of a likely development where the last bastion for cash—merchants—progressively stop accepting cash which lead to a situation where the average merchant may not even make profits from cash-based sales in 2023 AD. This is only 5 years from now!

The last decade has shown a continuous decrease in the use of cash in Sweden, and the likely future is that this will continue in the coming years. There is one factor—deteriorating interoperability of cash—that actually may speed up this decline or at least mean that it will not stop. As more and more merchants—probably influenced by each other—say no to cash, more and more consumers are likely to stop using cash, and this circle is likely to make the decline of cash to continue. In addition, other factors like the demographic development and introduction of new innovative services will continue to put pressure on cash and favor electronic and mobile payments. This development is also likely to become favored by the majority of Swedes.

There are of course also factors that work in the opposite direction. We can expect that specific groups in the society—like elderly and people with physical and/or cognitive disabilities—will continue to be dependent on cash and therefore suffer from a reduction of cash. There are also geographical regions where telecommunication systems and Internet access are not reliable and that merchants therefore prefer cash. If these groups are able to make politicians listen to them, we could see a movement that strives to keep cash to help these groups, which then would act to strengthen the position of cash in the Swedish society.

One central conclusion in this book is that the payment system in Sweden faces high degrees of change where a combination of simultaneous change in a number of factors—social, economic, technological, political, and legal—makes it difficult to foresee what may happen in the future. We are currently seeing that contactless cards grow in importance and we can expect the next phase will see growth of mobile payments in stores as well as in m- and e-commerce.

Contactless cards may become the factor that makes merchants to invest in point-of-sales terminals for contactless payments as well as to educate employees and consumers to start paying via mobile devices also in stores. Contactless cards should be understood as transitional objects on the road to contactless payments based on apps in the phones (even if still based on the technological systems for card payments). This will of course also be a way for card operators—e.g., VISA and Mastercard—as well as for large retail banks to continue being dominating players in the payment industry.

Another and more drastic—as well as unpredictable—pattern of change relates to the new regulation in combination with new technologies. The introduction of new legal licenses related to payments in the new payment service directives2 will enable new actors from Fintech to launch services that compete with banks. We will see more services—some that compete directly with banks’ payment services and some that complement them—and more actors. Merchants and consumers are likely to meet lower fees while at the same time facing the challenge to know how to select which service and which service provider to use. Many attempts to revolutionize the payment industry will be made where—as always—some will fail and be forgotten, while others may become the leading firms in an era of a fully digitalized payment system. And, it is likely some of the winners will come from Sweden.

No matter which viewpoint you have regarding the future of cash, you must admit we live in interesting (and either promising or problematic) times when we talk about money and payments!