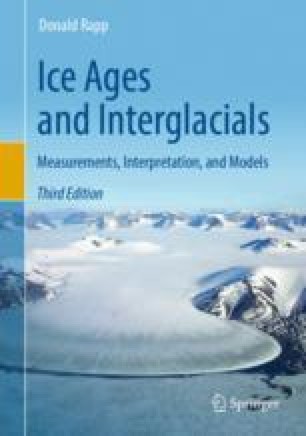 A steady rain of shells from small, surface-dwelling animals falls continually, eventually building up hundreds of meters of sediment at the bottoms of the oceans. These sediments preserve the shells of these small animals for millions of years. The most important of these animals, foraminifera (or forams for short), construct their tiny shells from a form of calcium carbonate (CaCO3). The carbonate, originally dissolved in the oceans contains oxygen, whose atoms exist in two naturally occurring stable isotopes, 18O and 16O. The ratio of these two isotopes is dependent on past temperatures. When the carbonate solidifies to form a shell, δ18O varies slightly, depending on the temperature of the surrounding water. However, there are complications. Paleoclimate reconstruction from the study of forams has resulted from basically three types of analysis: (1) oxygen isotope composition of calcium carbonate, (2) relative abundance of warm- and cold-water species, and (3) morphological variations in particular species resulting from environmental factors. Most studies have focused on oxygen isotope composition. Planktic forams represent a proxy for past sea surface temperatures. One of the most remarkable proxies is the ratio of oxygen isotopes in benthic (bottom dwelling) forams. This ratio, in ancient sediments, is believed to reflect the total amount of ice that existed on the Earth at the time the sea beds were formed. This ratio is therefore interpreted as a proxy for global ice. The assumption that benthic δ18O represents the ice volume is complicated by the fact that benthic δ18O is also affected by deep water temperature change. Generating a robust age model for benthic δ18O or ice volume without the assumptions of orbital tuning remains an important, unsolved problem. The dating of most ocean sediment cores is difficult, so many studies have resorted to “tuning”. This involves comparing the time line of ocean sediment data to various in solar input to high latitudes (for which accurate dating is known) and assigning dates to the ocean data based on variability of the solar data. This leads to circular reasoning in trying to develop a solar theory of Ice Ages. The ocean sediment data compare well to the ice core data, but again, use of “tuning” in both cases might make the comparison partly artificial.