Information and Communication Technologies in Tourism 2019 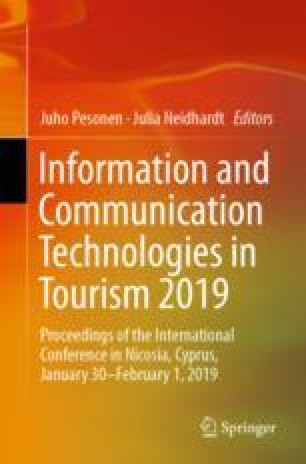 The aim of this study was to explore UK residents’ opinions of how peer-to-peer (P2P) accommodation listings within their communities impact upon their quality of life (QoL). Seven hundred and eighty open-ended questions were collected across the UK and content analysis was conducted to investigate the textual data. It is found that 13% of UK residents held positive opinion on P2P accommodation whereas another 13% expressed negative attitude and the rest kept neutral opinions. More people believed P2P accommodation brought positive economic and negative environmental impacts on the QoL, while the social influence was neutral. Opinions of London residents on P2P accommodation are different from those of non-London residents. Practical implications are provided to policymakers based on the empirical findings.

The fast-growing peer-to-peer (P2P) accommodation has generated significant economic contributions [1] and provided new employment opportunities [2] in tourism destinations. However, there are concerns that the rapid growth of P2P accommodation results in such issues as gentrification [3], increased housing prices [4], discrimination [5], avoidance of government regulation [6], and threats to traditional tourism and hospitality businesses [7]. While several studies have investigated socio-economic characteristics of areas with P2P listings [8], little work has been undertaken to understand how this disruptive innovation has affected the overall well-being of community residents from a holistic (social, economic, and environmental) perspective [9, 10]. The delicate balance between tourists and residents has long been a topic of interest for tourism scholars [11, 12] and the increase of tourists in residential areas brought by P2P accommodation will continue to place a strain on this important relationship. Under the framework of Social Exchange Theory (SET), numerous studies show that residents who perceive positive benefits from tourism will be more likely to support tourism development [13, 14, 15]. Studies have further shown that the local community’s support for P2P accommodation is also dependent on perceived social and economic impacts [16].

The development of tourism may not only affect the attitudes of hosts, but also the communities’ quality of life. A positive relationship between tourism development and communities’ quality of life (QoL) was found using one-off survey data [29, 30]. In contrast, using six waves of the European Social Survey data in 2002–2013, it was evidenced that as the tourism industry developed, the QoL of local residents increased at the beginning, but started to decline after the tourism development passed a certain level, indicating the negative impact of over-tourism [31].

The aim of this study was to explore UK residents’ opinions regarding how P2P accommodation listings within their communities have impacted their QoL. For this purpose an online questionnaire methodology was used where study participants were first provided with a working definition of P2P accommodation (“the short-term rental of private residences that is available through companies such as Airbnb and HomeAway”) followed by an open-ended question “please share with us your opinions of how peer-to-peer accommodations have impacted the quality of life in your community.” An academic definition of QoL was not provided to participants as doing so may have influenced their responses. Rather, respondents’ own interpretation of “quality of life in your community” allowed for an unbiased expression of issues related to P2P accommodation. The online survey was distributed via Survey Sampling International (SSI) and targeted SSI panel members residing in the UK (including England, Wales, Scotland, and Northern Ireland). Because issues surrounding P2P accommodation are particularly salient for urban communities and because London is one of the cities with the highest number of P2P listings, a purposive sampling strategy required 50% of the sample to reside in the Greater London area. Data were collected in June 2018 and resulted in a total of 780 valid responses, 390 of which resided in Greater London and 390 living elsewhere in the UK.

Survey respondents were also asked demographic questions regarding region of residence, gender, age, and education, number of years they have lived in their current community, and whether they had experience staying in P2P accommodation or listing a P2P accommodation. Responses to the open-ended question were then coded manually into three categories: (1) those reporting a negative impact on QoL in their community, (2) those reporting neutral impact on quality of life, and (3) those reporting a positive impact on QoL in their community. Responses describing both negative and positive impacts were coded as neutral. The open-ended responses were also processed using KH Coder content analysis software [33].

Characteristics of the UK sample are reported in Table 1. The distribution of region of residence for the outside London subsample was similar to that of the UK, and there was a representative distribution of gender, age, and education levels for the sample. The level of education of Greater London residents was significantly higher with 52.1 reporting at least a bachelor’s degree compared to 34.6% of non-London residents reporting the same levels of education. The Greater London area subsample could also be described as generally younger (40.3% were less than 45 years old) compared to the non-London subsample (71.3% at least 45 years old). Overall, nearly half (49.1%) of the sample had lived in their current community for 20 years or more, and only 12.4% of the sample had lived in their community less than five years. Interestingly, about a fifth of the total sample (21.4%) reported having previously stayed in P2P accommodation, with the share of London residents using P2P accommodation slightly higher than non-London residents (26.9% compared to 15.9%). Only a minority of the sample (6.2%) listed accommodations on P2P platforms.
Table 1.

Manual coding of the open-ended responses reveals a balance of opinions, with three quarters (73.7%) of UK residents having a neutral opinion of the impact of P2P accommodations, and the remaining one quarter almost evenly split between positive (13.1%) and negative (13.2%) opinions. Importantly, there are significant differences between the subsamples. In London, where P2P listings are more prevalent, fewer residents have a neutral opinion and there is a larger proportion of negative opinions towards P2P accommodation. Outside of London there are more positive than negative opinions of P2P accommodation’s impact on QoL (11.8% compared to 8.5%). These differences in opinions towards P2P accommodation between Londoners and the rest of the UK are statistically significant (χ2 = 18.1, df = 2, p < .001).

Content analysis of the open-ended responses was next conducted to determine factors that influence opinions towards P2P accommodation. Only responses indicating a non-neutral impact of P2P accommodation on QoL were included in the content analysis (n = 211). Using KH Coder, responses were first pre-processed in order to eliminate stop words (e.g. “a”, “an”, and “the”), extract the root form of words (i.e., lemmatization), and determine the part-of-speech (i.e., noun, verb, adjective) of each word. Word co-occurrence networks based on the top frequency words were then created in order to further understand patterns in the ways people communicate their opinions of P2P accommodation and QoL and to identify overall themes in the opinions of respondents. Separate analysis was conducted for the responses indicating positive opinions (n = 108) and negative opinions (n = 109). Figure 1 illustrates the word co-occurrence networks, where size of the nodes indicates word frequency, the thickness of lines (edges) connecting nodes indicates the strength of the connection between word pairs, and shades of nodes indicate the different communities or themes within the text of the responses that were identified using the random walk method [34].

Words such as “people”, “community”, “local”, and “visitor” were the most commonly used and are an indication that social issues related to QoL were most prevalently discussed among respondents. Less frequently used words such as “rent”, “money”, and “income” related to economic factors, and words such as “area”, “noise”, and “place” related to environmental factors. Examining the word association network for positive opinions of P2P accommodation, themes such as the opportunity to generate extra income, improve the cultural diversity, support local businesses, create jobs, and encourage the development and/or improvement of community facilities are revealed. Similarly, the word association network for negative opinions of P2P accommodation reveal themes related to increases in housing prices, increases in noise, litter, and traffic congestion, and the disruptive behaviour (e.g., parties and crime) of strangers to the neighbourhood.

Based on the patterns observed from the word co-occurrence networks, the response data was manually coded to further categorise the data into themes of social, environmental, and economic factors leading to both positive and negative opinions of P2P accommodation. Table 3 reports the frequency with which each of the themes is observed for the overall sample and the London/non-London resident subsamples.
Table 3.

Among all groups, social factors related to P2P accommodation’s influence on QoL are the most frequently mentioned. Quotes such as “…it helps everybody to be friendly…” and “…meet people from diverse cultures and learn something from them…” illustrate the positive social impacts of P2P accommodations on quality of life, while quotes such as “…I have a very acute awareness for my personal safety, I maybe a bit paranoid” and “…no community feel. No children playing or living in my flats. Over pricing pushing up costs in the area” illustrate the perceived negative social impacts of P2P accommodation.

Conversely, negative environmental impacts appear to outweigh any positive environmental impacts caused by P2P accommodation. Quotes such as “…constant bibs and loud music, untidy front gardens, too many cars belonging to one residence causing parking problems…” and “…more trash is left outside rented buildings…” illustrate concerns regarding litter, noise pollution, and increased traffic and parking congestion. Positive environmental impacts were seldom mentioned, but several quotes such as “…encouraged the local council to improve facilities…” and “…accommodations have had to be maintained to an acceptable standard…” suggest that some respondents perceive improvements to local infrastructure and services due to P2P accommodation in their community.

Based on content analysis, factors influencing both positive and negative sentiment towards P2P accommodation have been categorised as social, environmental, and economic factors. This categorisation of impacts is consistent with previous P2P accommodation studies, such as [16] and [32]. Social factors encompass the most prevalent issues, while environmental issues seem to have the least impact on QoL. Different from the findings of [16] and [32], economic issues, which capture news headlines, are found to be of secondary concern to social factors. Further, negative economic factors (such as increased cost of living) is a more discussed issue outside of London, rather than within the Greater London area. Further, negative environmental factors seem to outweigh negative economic factors. The identification of social, environmental, and economic factors are consistent with existing theoretical frameworks explaining tourism’s impact on residents’ QoL. Further research is now needed to better understand the relative power each factor has in influencing the overall well-being and QoL for residents and to assess the optimum level of P2P accommodation development within a community. Future studies may also wish to investigate how residents’ satisfaction with current social, environmental, and economic conditions may influence attitudes towards P2P accommodation.

Several recommendations for decision makers can be made. First, it is essential to recognize that P2P accommodation in the eyes of residents appears to be a double-edged sword, with the number of residents supporting and opposing P2P accommodation in near balance. Support for P2P accommodation in part seems to be influenced by age and experience. Therefore, the public relations of P2P platforms may focus on communicating with older generations in order to win community support. Additionally, because of the particular importance of social issues revealed through this study, greater attention needs to be given to what might be described as the possible erosion of community identity as P2P accommodation is introduced. Policies and best practices should be devised which preserve and celebrate the unique social/cultural identity of communities, understanding that it is often this sense of community that attracts visitors in the first place, and which community members are most concerned with losing.

This work was supported by the University of Surrey, School of Hospitality and Tourism Management.