The Politics of Southern Pastoral Literature, 1785–1885 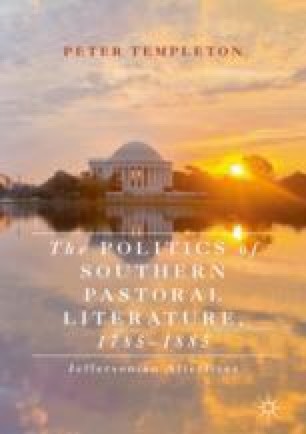 In The Youth of Jefferson, John Esten Cooke produced a work in which Jefferson’s university days were imagined as a pastoral Neverland, one that incorporates certain elements of Jeffersonian political philosophy with traditions borrowed from literary ancestors, including William Shakespeare’s pastoral play, As You Like It. This chapter closely assesses Cooke’s presentation of Jefferson and his philosophies, and explores the reasons for invoking the revolutionary period at this stage in the nineteenth century.