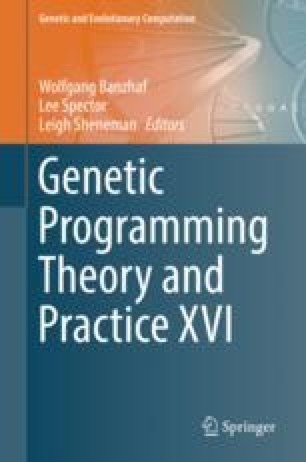 Developing the Brain and Evaluating the Fitness

Lines 13–22 are concerned with calculating fitness. For each computational problem an ANN is extracted from the underlying brain. This is carried by a function ExtractANN(problem, OutputAddress) which is detailed in Algorithm 9. This function extracts a feedforward ANN corresponding to each computational problem (this is stored in a phenotype which we do not detail here). The array OutputAddress stores the addresses of the output neurons associated with the computational problem. It is used together with the phenotype to extract the network of neurons that are required for the computational problem. Then the input data is supplied and the outputs of the ANN calculated. The class of a data instance is determined by the largest output. The learning loop (lines 8–29) develops the brain and exits if the fitness value (in this case classification accuracy) reduces (lines 23–27 in Algorithm 1). One can think of the ‘pre’ development phase as growing a neural network prior to training. The ‘while’ phase is a period of development within the learning phase. Nep denotes the user-defined number of learning epochs. Np represents the number of problems in the suite of problems being solved. Nex(p) denotes the number of examples for each problem. A is the accuracy of prediction for a single training instance. F is the fitness over all examples. TF is the accumulated fitness over all problems. Fitness is normalised (lines 20 and 22).

Algorithm 2 shows the update brain process. This algorithm is run at each developmental step. It runs the soma and dendrite programs for each neuron and from the previously existing brain creates a new version (NewBrain) which eventually overwrites the previous brain at the last step (lines 52–53).

Algorithm 2 starts by analyzing the brain to determine the addresses and numbers of non-output and output neurons (lines 3–11). Then the non-output neurons are processed. The evolved soma program is executed and it returns a neuron with updated values for the neuron position, health and bias. These are stored in the variable UpdatedNeurV ars.

If the user-defined option to disallow non-output neuron movement is chosen then the updated neuron position is reset to that before the soma program is run (lines 16–17). Next the evolved dendrite programs are executed in all dendrites. The algorithmic details are given in Algorithm 6 (See Sect. 8.3.5).

The neuron health is compared with the user-defined neuron death threshold NHdeath and if the health exceeds the threshold the neuron survives (see lines 22–28). At this stage it is possible that the neuron has been given a position that is identical to one of the neurons in the developing brain (NewBrain) so one needs a mechanism for preventing this. This is accomplished by Algorithm 3 (Lines 19 and 46). It checks whether a collision has occurred and if so an increment MNinc is added to the position and then it is bound to the interval [−1, 1]. In line 23 the updated neuron is written into NewBrain. A check is made in line 25 to see if the allowed number of neurons has been reached, if so the non output neuron update loop (lines 12–38) is exited and the output neuron section starts (lines 39–51). If the limit on numbers of neurons has not been reached, the updated neuron may replicate depending on whether its health is above the user-defined threshold, NHhealth (line 29). The position of the new born neuron is immediately incremented by MNinc so that it does not collide with its parent (line 30). However, its position needs to be checked also to see if it collides with any other neuron, in which case its position is incremented again until a position is found that causes no collision. This is done in the function IfCollision.

In CreateNewNeuron (see line 32) the bias, the incremented position and dendrites of the parent neuron are copied into the child neuron. However, the new neuron is given a health of 1.0 (the maximum value). The algorithm examines the non-output neurons (lines 39–51) and again is terminated if the allowed number of neurons is exceeded. The steps are similar to those carried out with non-output neurons, except that output neurons can not either die or replicate as their number is fixed by the number of outputs required by the computational problem being solved.

The details of the neuron collision avoidance mechanism is shown in Algorithm 3.

Algorithm 3 Move neuron if it collides with another

The UpdateBrain program calls the RunSoma program (Algorithm 4) to determine how the soma changes in each developmental step. The seven soma program inputs comprising the neuron health, position and bias, the averaged position, weight and health of the neuron’s dendrites and the problem type are supplied to the CGP encoded soma program (line 12). The array ProblemTypeInputs stores NumProblems+1 constants equally spaced between − 1 and 1. These are used to allow output neurons to know what computational problem they belong to.

The soma program has three outputs relating to the position, health and bias of the neuron. These are used to update the neuron (line 13).

The UpdateNeuron Algorithm 5 updates the neuron properties of health, position and bias according to three user-chosen options defined by a variable Incropt. If this is zero, then the soma program outputs determine directly the updated values of the soma’s health, position and bias. If Incropt is one or two, the updated values of the soma are changed from the parent neuron’s values in an incremental way. This is either a linear or nonlinear increment or decrement depending on whether the soma program’s outputs are greater than or less than or equal to zero (lines 8–16). The magnitudes of the increments is defined by the user-defined constants: δsh, δsp, δsb and sigmoid slope parameter, α (see Table 8.1).

The increment methods described in Algorithm 5 change neural variables, so action needs to be taken to force the variables to strictly lie in the interval [−1, 1]. We call this ‘bounding’ (lines 34–36).This is accomplished using a hyperbolic tangent function.

Running All Dendrite Programs and Building a New Neuron

Algorithm 6 Run the evolved dendrite program in all dendrites

Algorithm 7 Change dendrites according to the evolved dendrite program

Algorithm 2 uses a function CreateNewNeuron to create a new neuron if the neuron health is above a threshold. This function is described in Algorithm 8. It makes the new born neuron the same as the parent (note, its position will be adjusted by the collision avoidance algorithm) except that it is given a health of one. Experiments suggested that this gave better results.

In Algorithm 1, a conventional feed-forward ANN is extracted from the underlying collection of neurons (line 15). The algorithm for doing this is shown in Algorithm 9. Firstly, this algorithm determines the number of inputs to the ANN (line 5). Since inputs are shared across problems the number of inputs is set to be the maximum number of inputs that occur in the computational problem suite. If an individual problem has less inputs than this maximum, the extra inputs are set to 0.0. The brain array is sorted by position. The algorithm then examines all neurons (line 7) and calculates the number of non-output neurons and output neurons and stores the neuron data in arrays NonOutputNeurons and OutputNeurons. It also calculates their addresses in the brain array.

Algorithm 9 The extraction of neural networks from the underlying brain

Algorithm 9 stores the information required to extract the ANN in an array called Phenotype. It contains the connection addresses of all neurons and their weights (lines 29–30 and 45–46). Finally it stores the addresses of the output neurons (OutputAddress) corresponding to the computational problem whose ANN is being extracted (lines 49–52). These define the outputs of the extracted ANNs when they are supplied with inputs (i.e. in the fitness function when the Accuracy is assessed (see Algorithm 1). The Phenotype is stored in the same format as Cartesian Genetic Programming (see Sect. 8.4) and decoded in a similar way to genotypes.