Towards a Philosophy of Caring in Higher Education 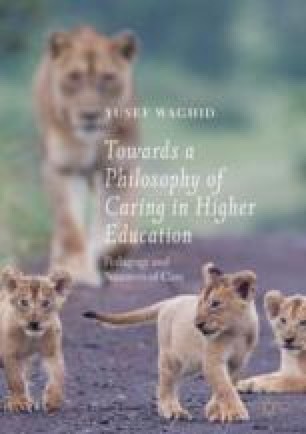 In the previous three chapters, I have argued for a notion of caring that is inclusive, practical and authentic. At the centre of such explications of caring is the idea that people are in relationality, and the care on offer has some practical, social and political purpose in mind. Therefore, pedagogical encounters underscored by such notions of caring can be highly engaging, relational and politically driven, in much the same way as Carol Gilligan (1982), Nel Noddings (1984), and Paulo Freire (2001), respectively, have envisaged. Anecdotally speaking, I view my appointment in my current department two decades ago as one in which I also expected to be treated authentically with care, and that my transactional experiences with colleagues would manifest in relationships of care. Perhaps, I was somewhat naïve at the time to think that care would naturally unfold when humans in our department encountered one another academically and professionally. Little did I know at the time, that higher education can be a highly exclusivist activity where colleagues would not hesitate to make you feel somewhat unwelcome. I do not mention my initial induction into the department to show that not all academics had an inclination to care. However, I mention an incident below to show that transactional caring is a human experience that requires mutuality and engagement. One of my colleagues deemed it necessary to consider my appointment contentious. Understandably at the time, with not many people of colour having been appointed in the faculty, someone considered my appointment as other on the grounds of not belonging to the dominant culture at the time. When such conditions prevail, it seems very unlikely for collegiality to unfold and the possibility of mutual, transactional care might be curtailed. However, the senior professors in my department showed care, and my appointment never really became a public spat. My initiation into the department was supported by the recognition on the part of my senior colleagues that I could bring something else to the department. In a different way, the majority of my colleagues cared enough to recognise that democratic education would take on an extended form with my presence in the department. It is a notion of transactional care that interests me in the light of my own exposure to what I think happened with my appointment in the department where I still work. But first, I need to focus my attention specifically on what has emerged thus far as a non-individualistic notion of caring, in reference to the seminal thoughts of care ethicist, Maurice Hamington (2006), who specifically expounds on the care work of Jane Addams, in particular her work for the Hull-House caring settlement in Chicago, which lasted roughly from the late 1800s to World War I. What interests me about Hamington’s work is his distinct focus on transactional caring as an instance of an ethic of care in relation to his exposition of socialising care (Hamington, 2006: 107).