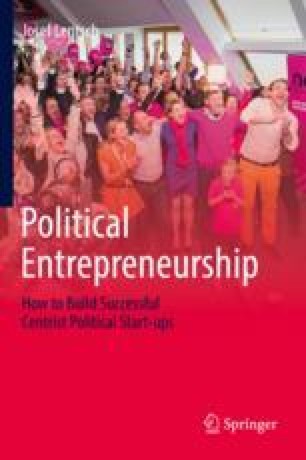 The chapter offers a summary of the challenges faced by liberal democracies in Europe and around the world, as well as how politics need to change to deal with them effectively. Drawing on recent literature on the topic, it reviews the argument that for more than a decade, democracy has been “in recession”. It then challenges that argument with an alternative narrative to the dystopian scenario of democratic decline: the case is made that twenty-first century democracies are in fact realigning instead of disintegrating. In many countries, traditional parties have become a problem in and of themselves, unable to effectively reform themselves and their democracies. The resulting civic dissatisfaction is fertile ground for populists, but also for centrist political start-ups. The chapter then highlights that political entrepreneurship is not inherently morally good or bad, and what practical parallels with business entrepreneurship exist. It shows that some of the most successful political entrepreneurs of late have been populists and extremists on both the Left and the Right.

Liberal Democracy Political Entrepreneurs Mass-based Parties Mother Party Youth Organizations
These keywords were added by machine and not by the authors. This process is experimental and the keywords may be updated as the learning algorithm improves.