Wealth Creation in the World’s Largest Mergers and Acquisitions 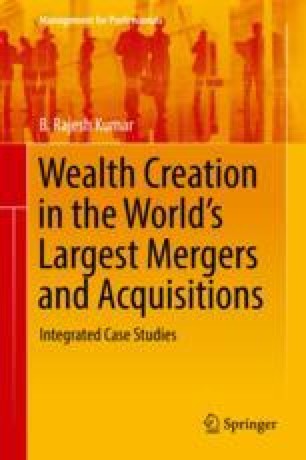 Chapter
Part of the Management for Professionals book series (MANAGPROF)

In January 2006, Lakshmi Mittal the chairman of Mittal Steel announced a hostile bid for Arcelor. After an intense struggle, the two companies merged to become the world’s largest steel which controlled 10% of the global steel business. The deal was valued at $38.3 billion. Arcelor’s directors, including Chief Executive Guy Dolle, had opposed the takeover. The French, Luxembourg, and Spanish governments strongly opposed the takeover. In its first step to prevent the deal, Arcelor transferred its subsidiary, Dofasco, into a trust and adopted the poison pill strategy to keep Mittal from buying Arcelor. The adoption of poison pill made it difficult for Mittal Steel to carry out the deal. Mittal capped his stake under 45% and offered 12 of 18 seats on the board to independent directors, including those from the unions, and also agreed to a lock in on his shares for 5 years. On June 25, 2006, the Arcelor board decided to go ahead with the merger with Mittal Steel and scrapped plans for Severstal Steel. According to the terms of the deal, Arcelor investors received 50.5% of ownership, and Mittal Steel investors received 49.5% of ownership of the merged company. Arcelor shareholders received 13 Mittal Steel shares plus euro 150.60 in cash for 12 Arcelor shares. The combined Arcelor–Mittal accounted for 10% of world’s steel production. It occupied number one position in North America, South America, Europe, and Africa.

Arcelor Mittal Mittal Steel Lakshmi Mittal Dofasco Poison Pill
These keywords were added by machine and not by the authors. This process is experimental and the keywords may be updated as the learning algorithm improves.
This is a preview of subscription content, log in to check access.