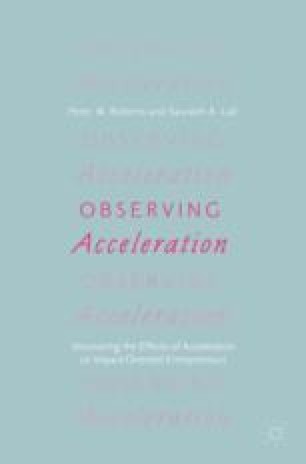 If it is important to accelerate impact-oriented ventures in places where economies are developed and per capita incomes are high, then it is doubly important to do so in emerging markets. However, the increased need for positive entrepreneurial outcomes in emerging markets is met with amplified shortcomings in these local ecosystems. A large number of the programs identified in Chap.  3 attempt to meet these needs by accelerating early-stage ventures that operate in countries across Africa, Latin America, and Asia. However, it is not yet clear whether the accelerator model, which originated in well-developed entrepreneurial ecosystems, also works in less-developed economies. After using the World Bank classification to organize the EDP ventures into those operating in high-income countries versus emerging markets, the first analysis shows that this latter group actually comprises two sub-groups: those seeking acceleration services in their home countries and those applying to programs run in other countries. The next observations show how these two groups of emerging-market ventures and entrepreneurs differ from their high-income-country counterparts. The chapter closes by showing that the effects of acceleration are still evident, but are somewhat muted, among the two groups of emerging-market ventures.

To give an indication of the country-level differences that will become clearer as the EDP sub-samples grow within specific countries, Table 9.10 provides a first look at three emerging-market countries—India, Kenya, and Mexico. In some ways, the ventures and entrepreneurs in three countries are similar. A small percentage (from 3 percent in Mexico to 5 percent in India) of the ventures are headquartered in another country. There are also small differences in the percentages of nonprofit ventures. The average ages of the ventures and founders are also similar across countries. Moreover, the three groups have used this time to drive revenues to roughly the same level. The differences between roughly $29,000 in Kenya, $31,000 in India, and $45,000 in Mexico are not significant (p = 0.30). Looking further down the table, a similar percentage of these founders (roughly two-thirds) invest a similar amount of their own funds into their ventures (between $33,000 and $44,000 on average).
Table 9.10

Differences across India, Kenya, and Mexico

There are also differences that warrant further scrutiny in future country-level analyses. The dominant sectors (by a fairly wide margin) are education in India, agriculture in Kenya, and health in Mexico. These differences might have more to do with the different focus areas of the EDP programs than actual differences in the underlying populations of ventures seeking acceleration. However, the magnitude of these differences makes them worthy of attention.

There are other differences as well. Ventures in Mexico are significantly more likely to own some form of intellectual property (roughly 56 percent), while ventures in India are somewhat larger in size (5 employees). Indian entrepreneurs tend to be less-experienced, with only 39 percent reporting any prior founding experience, compared with roughly 56 percent of Kenyan entrepreneurs and 68 percent of Mexican entrepreneurs. India also has the lowest percentage of all-women and mixed-gender teams of the three countries.

Turning to variables that indicate the state of the ecosystems in the three countries, the likelihood that someone on the founding team received support from another accelerator prior to application is lowest in India (roughly 22 percent). However, investment conditions seem to be most problematic in Kenya, where ventures report the lowest levels of equity, debt, and philanthropic investment. The former equity deficit is significant. Further indication of the challenges experienced in Kenya is found in the percentage of applicants who seek acceleration in their home countries. Roughly 72 percent of the EDP applicants from Kenya applied to programs run in Kenya, compared with more than 92 percent in India. Mexican entrepreneurs are in between, with roughly 85 percent applying to Mexican accelerators. If the likelihood of applying to local programs is an indicator of confidence in the combination of local ecosystems and accelerators, then these significant differences suggest greater problems in Kenya than in India.

It is surprising that entrepreneurs in all three countries place similarly low emphasis on gaining access to potential investors (see Fig. 9.4). Only about 12–13 percent of entrepreneurs rank this benefit as number one. This may reflect an unfamiliarity with the network-based processes that tend to drive external financing outcomes or a lack of availability of investors across these three ecosystems. Given their problems attracting outside investment, it is not surprising that entrepreneurs from Kenya place the highest priority on obtaining direct funding from accelerators (see Fig. 9.4). Roughly 30 percent of them rank the direct funding benefit highest, compared with just 15 percent of the entrepreneurs in the Mexico sub-sample. They also place a greater emphasis on developing business skills relative to the other two groups of entrepreneurs. On the other hand, they are significantly less likely to place a high value on mentorship, with only 15 percent of them ranking this potential benefit first, compared with 21 percent and 24 percent in the India and Mexico sub-samples, respectively.
The final set of observations relates to the effects that accelerators have on ventures that operate in the three countries. With appropriate caveats for the fact that different percentages of entrepreneurs participate in same-country versus other country programs, and the fact that entrepreneurs tend to prioritize different accelerator benefits, the two panels of Fig. 9.5 provide plenty to think about as we design future country-level studies of the differential effects of acceleration. First, when it comes to revenue growth, there are similar positive cascades for the percentage of accelerated ventures across the negative-growth, no-growth, and positive-growth groups. In all three countries, there is a higher percentage of accelerator participants among the latter positive-growth group and a lower percentage among the former negative-growth group. Despite the many differences among entrepreneurs, ventures, and ecosystems, the overall emerging-market pattern reported in Fig. 9.3 is fairly consistent across these three emerging-market countries.

These initial country-level observations offer a glimpse into the types of analyses that should continue into the future.