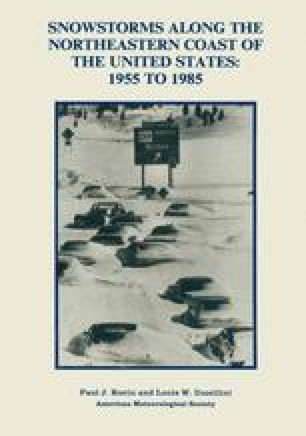 Summary of the Physical and Dynamical Processes that Influence Northeast Snowstorms

Twenty severe snowstorms that affected the northeastern coast of the United States between 1955 and 1985, have been selected for study based on their extensive distribution of heavy snowfall (>25 cm) across one of the most heavily populated and industrialized regions of the world, including the metropolitan areas of New York, Washington, Boston, Philadelphia, and Baltimore. Analyses of the surface and upperlevel fields of pressure, geopotential height, wind, and temperature, plus other selected elements described in the preceding two chapters, provide a framework for understanding the dynamical and thermodynamical processes that contribute to heavy snowfall in the northeastern United States. These analyses point out the important role of cyclogenesis, which was observed to some degree in each of the 20 snowstorms. Surface cyclogenesis involved either a primary low-pressure center or a secondary development along the Southeast or Middle Atlantic coast that tracked northeastward approximately 100 to 300 km offshore.

Latent Heat Release Heavy Snowfall Northeastern Coast Heavy Snow Vorticity Maximum
These keywords were added by machine and not by the authors. This process is experimental and the keywords may be updated as the learning algorithm improves.
This is a preview of subscription content, log in to check access.

Cite this chapter as:
Kocin P.J., Uccellini L.W. (1990) Summary of the Physical and Dynamical Processes that Influence Northeast Snowstorms. In: Snowstorms Along the Northeastern Coast of the United States: 1955 to 1985. Meteorological Monographs. American Meteorological Society, Boston, MA. https://doi.org/10.1007/978-1-940033-93-8_6